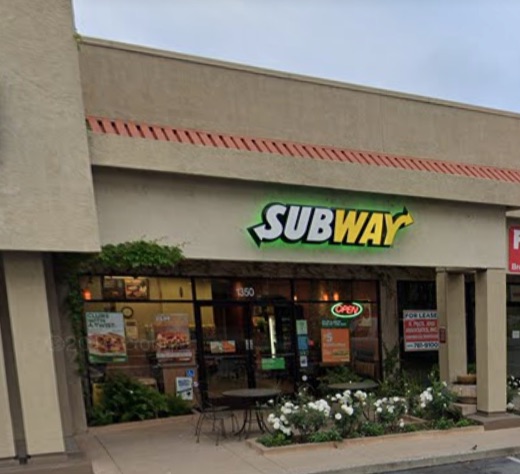 –On Thursday at approximately 8:30 p.m., the San Luis Obispo Police Department responded to a report of an armed robbery that had just occurred at the Subway Sandwich Shop located in the 1300 block of Madonna Road in San Luis Obispo.

The suspect entered the store and pointed a handgun at the employee behind the counter and demanded money from the register. The suspect obtained an undisclosed amount of cash. The suspect then left the store fleeing through the front doors in an unknown direction.

The suspect was described as an unknown race male, late twenties, 5’10”, with a thin build. He was wearing a black hooded sweatshirt with the hood pulled up over a black hat and he had a red bandana covering his face. The suspect had long, black, chest-length hair and due to its color, texture, and shine, it is believed that it may have been a wig.

This is an on-going investigation. Anyone who witnessed or has any information regarding this incident, or the person of interest in the photos, is encouraged to contact SLOPD at 805- 781-7312. Anonymous information can be referred to Crime Stoppers @ (805) 549-STOP.