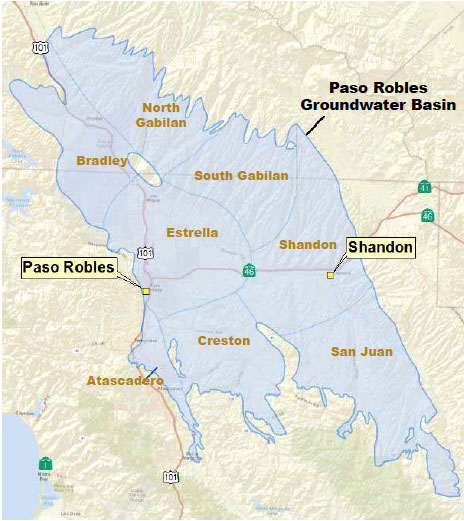 A map of the Paso Robles Groundwater Basin. Image from City of Paso Robles

The majority of the discussion, both from the board and from the public, revolved around whether or not the Atascadero sub-basin should be included in the groundwater sustainability agency, which is part of a three-bill package — the Sustainable Groundwater Management Act — sponsored by Senator Fran Pavley and Assemblyman Roger Dickinson.

“All these dates that seem far in the future, aren’t,” Second District Supervisor Bruce Gibson said, urging that the staff return with a draft application to LAFCO.

The boundaries for the water district can either be determined by the study of the Paso Robles basin by Fugro and Cleath in 2002 or the boundaries set forth in Bulletin 118, of which the act requires management. County staff is exploring the possibility of designating a negative sphere of influence within the Department of Water Resources boundaries that tracks the boundaries identified by Fugro and Cleath. County staff is also exploring the possibility of treating the Atascadero sub-basin differently than other areas falling within the water resources boundaries.

County Public Works Administrative Services Director John Diodati said that the Atascadero basin would need to be part of the basin at this time, but could be detached in the future.

“If we provide that boundary, we ensure we are SGMA compliant,” Diodati said.

Atascadero Mutual Water Company General Manager and Paso Groundwater Basin Advisory Committee Chairman John Neil said that the committee unanimously recommends that the Bulletin 118 boundaries are used. However, he said that the mutual water company board does not want the Atascadero sub-basin to be included in the negative sphere of influence.

Many residents from Atascadero and Templeton, both which receive their water from the Atascadero sub-basin, spoke against the sub-basin being include in the Paso Robles Groundwater Basin management district.

The board took five separate votes, the first four to take action on the four issues and the final to approve the four actions. The first was on boundaries, that the Atascadero sub-basin be included in a positive sphere of influence so it can be added at a later time if Atascadero wants to be included. Arnold said that the application going to LAFCO will not include the Atascadero sub-basion in the boundaries for the Paso Robles basin. Arnold added that LAFCO or the Department of Water Resources could change that. It was approved 4-1 with Gibson dissenting.

“This is exactly why we should move it forward with the DWR Bulletin 118 boundaries,” Gibson said. “… The reality is we don’t have the technical background right now to make that decision.” He added that this issue should be made by LAFCO.

The second was on the powers of the district. The board asks for clarification on how the laws apply and how to not undermine the county’s powers. It was approved 4-1, Fifth District Supervisor Debbie Arnold dissenting.

For funding, the board continued, 5-0, that discussion for further analysis on all the options. The final item for direction was to request that a draft application to LAFCO come back in parallel with the other items in 90 days, if possible. That was approved 5-0.