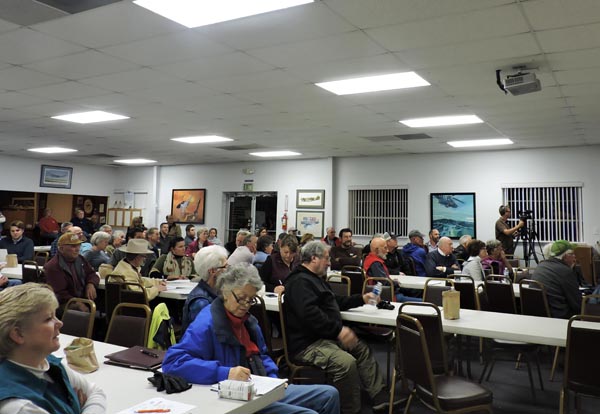 Citizens Advocating for Local Management of the Paso Robles Groundwater Basin, or CALM, hosted an informational meeting on Measures A and B and a candidate forum for the public to hear and see the candidates who are running for the board of the proposed Paso Robles Basin Water District on Tuesday evening at the Estrella Warbirds Museum.

–A group called the Citizens Advocating for Local Management of the Paso Robles Groundwater Basin, or CALM, hosted an informational meeting on upcoming Measures A and B and a candidates forum for the public to hear from and meet those running for the board of the proposed Paso Robles Basin Water District. The event was held Tuesday evening at the Estrella Warbirds Museum. It was open to the general public and dozens of local citizens attended.

CALM’s presentation said it is key for those who live within the management district, whom they call overliers, to have local control via creation of a local water district.

The purpose of forming a district is to manage the groundwater resources consistent with the State of California’s new Sustainable Groundwater Management Act. The act has set forth requirements for groundwater sustainability agency formation in all areas, including cities as well as rural areas that are pumping water from wells. Members of the potential district are in rural areas that are outside of city limits as well as outside of special district limits such as the Templeton Community Services District. Cities such as Paso Robles and Atascadero are already subject to water use restrictions from the state.

The Paso Robles Groundwater Basin has been classified as critical, meaning the state could require that local wells pump no more than what is recharged.

There are three options for control of the basin: the state, the San Luis Obispo County Board of Supervisors, or a locally managed water district. Property owners will get a chance to vote on whether to form a management district, and registered voters in the area will decide on whether to pay for it. The voting will be conducted by mail in February and early March.

The informational meeting went over Measures A and B, introduced a panel of candidates that have entered the bid for the potential board, and took anonymous written questions from the audience.

Measure A is for a special assessment tax that has been proposed by the county to fund the groundwater agency. The tax would raise about $950,000 dollars to establish the district, and must have two-thirds voter approval. Landowners in the proposed district boundaries will vote on this measure.

Measure B – Local management control of the basin

The passing of Measure B would approve local management of the basin by forming a water district and allowing it to appoint a board. Registered voters in the proposed district boundaries will vote on this measure. 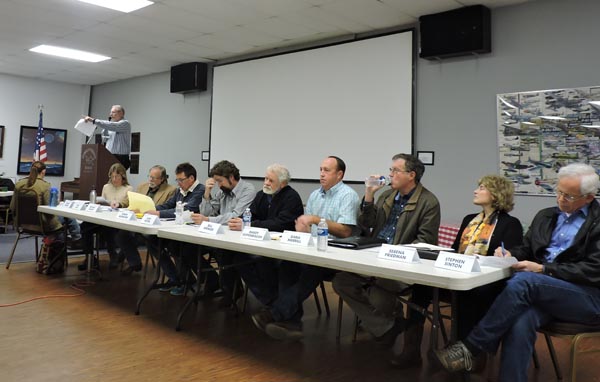 Eleven candidates will bid for nine seats on the management board if the measures are passed and a local water district is formed.

The board would be made up of both small, medium and large property owners and registered voters.

The deadline for filing candidacy for the board was early December.

Watch the candidates introduce themselves below:

The group advocates that local control would be the best option, for various reasons, such as: 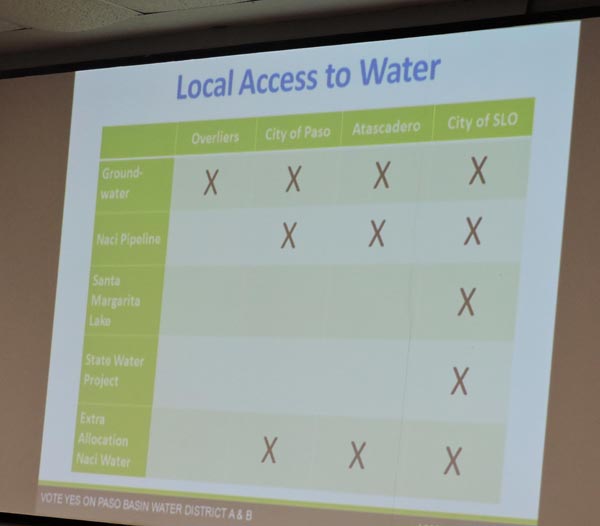 A slide outlining some of the key arguments for local control as presented by CALM.

They also say that SGMA requires the entire basin be managed under a single Groundwater Sustainability Agency. A Joint Powers Agreement, or JPA, must be formed between Monterey and San Luis Obispo counties, the city of Paso Robles, and several other agencies to ultimately manage the basin. The new water district must concede local regulatory power to the JPA.

“All the water district will do for the residents is to tax them to fund new offices, bloated employee salaries with benefits and expensive retirements to the tune of almost $1 million per year, without adding one single drop of water to the basin,” says PR WIN in their argument against the basin. They say that full basin adjudication in court is the, “only management solution which will save the basin while protecting our water rights.”

One of the questions asked at the meeting was regarding the county’s Flood Control District and its existing powers to manage the basin. CALM says that the FCD has done, “nothing to help citizens in the last 70 years…No projects, just reports and restrictive ordinances.” CALM also says that none of the five supervisors on the FCD are overliers, or have a well, and three of five of them live outside North County, therefore their interests may not lie in the North County.

Another topic that was brought up was whether or not the district would be allowed to sell water to other districts, or allow water to be transported out of the district for any reason. “I think everyone of this panel is committed to not letting a single drop of water leave this basin,” said Micheal Baugh. Sue Luft said that the district would be prohibited from selling water from the basin.

Another question asked was: What will the money be used for, and who will have control of the money that’s collected, the board or the county? Hilary Graves responded by saying that the money would be used to create the district, which would entail forming a plan, hiring staff, and creating an office. “Depending on how you vote, the money will exist for either the county or the a water district to use. If you vote ‘no’ the state will take over,” she said.

To find out if you are in the proposed water district boundaries as set by the Department of Water Resources (DWR) Bulletin 118, visit the County’s interactive map and type in your address or parcel number.