Paso Robles News|Tuesday, January 31, 2023
You are here: Home » Crime » Suspect arrested after reporting himself to police

Suspect arrested after reporting himself to police 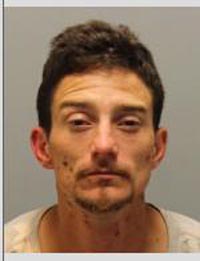 –On Wednesday morning, at approximately 1:41 a.m., Paso Robles Police Department officers arrested 30-year-old Nathan Adkins of Paso Robles, related to a residential burglary where he had reportedly stolen a loaded shotgun from an occupied residence.

The incident began on Tuesday night, at approximately 10:19 p.m., when officers began responding to a series of phone calls where callers reported seeing a man with a gun in their neighborhoods near Trigo Lane and Creston Road, Paso Robles. The first call came from an anonymous party, at approximately 10:19 p.m., where the caller said a man was carrying a gun along the 500 block of Creston Road, Paso Robles. The second phone call, at approximately 11:25 p.m., came from an identified resident who reported a man carrying and brandishing a shotgun while trespassing in their Trigo Lane backyard, according to police.

Lastly, an identified victim who lived along the 600 block of Trigo Lane reported they were the victim of a residential burglary where the suspect had stolen their shotgun. Each time the officers arrived to the area the suspect managed to elude them by running through backyards and hiding.

As part of this investigation, officers tried to determine the source of the original anonymous call and eventually determined the phone belonged to Nathan Adkins of Paso Robles. Adkins had previous arrest history for being under the influence of a controlled substance.

Officers subsequently prepared a photo lineups of Adkins and showed his picture to victims. The victims all positively identified Adkins as the person stealing and brandishing the shotgun.

It is unknown why Adkins initially reported himself to police, via the original phone call, although drug use is suspected as a contributing factor, police say.