Garrett Kaplan, 23, was arrested and charged with felony animal cruelty after a several months-long investigation. He pleaded not guilt to the charge last week and is awaiting a preliminary hearing. He is free on bail

In related news, the badly-burned steer named Panda was able to find a new home and avoid being sold at a livestock auction: Badly-burned Panda the steer finds new home. 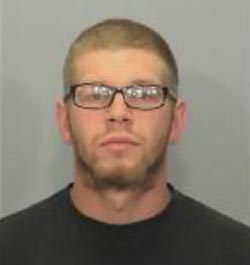 Original report June 2, 2014: After several months of investigation, the Paso Robles Police Department arrested a suspect in the case of animal cruelty toward an FFA steer at Paso Robles High School in October, police reported today.

Paso Robles police detectives interviewed several witnesses and individuals associated with the incident, and also collected several items of evidence that assisted with the overall case. The findings were forwarded to the San Luis Obispo County District Attorney’s Office, who formally filed felony animal cruelty charges and issued a warrant for that subject’s arrest. The warrant was issued on May 23, 2014 for one count of 597(a)PC – Animal Cruelty, a felony.

On Friday at about 7 p.m., police officers contacted suspect Garrett Evan Kaplan, 23, in the 1100 block of Dorothy St. and placed him under arrest for the outstanding felony warrant without incident. Kaplan was later transported to San Luis Obispo County Jail and booked into custody on the warrant. 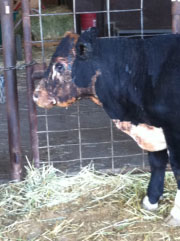 On Oct. 26, 2013 at about 8:05 a.m. the Paso Robles Police Department received a report of animal cruelty at the agriculture barn at the Paso Robles High School. The reporting party stated his juvenile son is a student at the high school and member of the National FFA Organization, according to a police report. As part of this program, his son housed his 5-month old steer at the agriculture barn. The reporting party went to the barn to feed the animal and found that it had been burned, the report said. The animal suffered significant burn injuries but is expected to survive.

It appeared that the suspect entered the barn sometime between 4:30 p.m. on Friday, Oct. 25 and 8 a.m. the next day and set fire to the animal for unknown reasons, the report said.