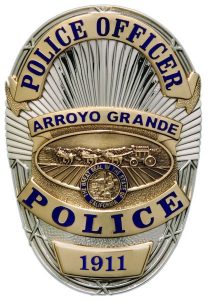 –On Sunday, at approximately 5:24 p.m., Arroyo Grande Police Department officers were dispatched to the 100 block of Wesley St. for an intoxicated subject possibly about to ride away on a motorcycle. While officers were responding, the victim contacted the male driver, later identified as 50-year-old Todd Perkins of San Miguel, in an attempt to prevent him from driving while intoxicated. The victim then advised dispatch that Perkins had pulled a gun on him, and he (the victim) had left the area.

Officers quickly arrived on scene and detained Perkins and a female he was with. Officers made contact with the victim and, upon investigation, it was determined Perkins had pointed a loaded 9 mm handgun at the victim and had threatened to kill the victim during the confrontation. Officers were able to locate the involved handgun in the bushes near where Perkins was contacted.

Perkins was taken into custody for assault with a deadly weapon, criminal threats, carrying a concealed firearm. Perkins was booked into the San Luis Obispo County Jail.