–At the conclusion of a three-day preliminary hearing, a San Luis Obispo County Superior Court Judge ruled that there is probable cause to believe that David Rodriguez Hernandez committed the crimes of murder, conspiracy to commit kidnapping, robbery, and assault with a deadly weapon. These charges are stemming from the 2013 murder of Victor Hugo Sanchez.

In 2013, Victor Sanchez (37) was shot and killed in Paso Robles. The victim’s ex-girlfriend Maria del Carmen Granados Fajardo, who was prosecuted and sentenced to 21 years to life in 2014, paid to have Sanchez injured and later killed. David Rodriguez Hernandez is charged as one of the individuals hired to injure and kidnap Sanchez. Three other suspects are still on the run. The victim was first assaulted on Oct. 6, 2012, with a tire iron, which left him with several broken bones. On Feb. 23, 2013, the hired group returned to kidnap and shoot Sanchez in the knees. However, the victim resisted and was shot multiple times in a parking lot of a Paso Robles apartment building. The injuries resulted in the death of Sanchez.

David Rodriguez Hernandez was extradited from Mexico to face prosecution after having been on the run for six years. Several law enforcement and immigration agencies were involved in the extradition of Hernandez. He was booked into the County Jail on Jan. 30. 2019. Today, at the conclusion of a three-day preliminary hearing, a San Luis Obispo County Superior Court Judge ruled that there is probable cause to believe that Hernandez committed the crimes of murder, conspiracy to commit kidnapping, robbery, and assault with a deadly weapon.

Hernandez will be arraigned on the charges on July 31, 2019 in Department 1 of the Superior Court and the case will be set for trial. Deputy District Attorney Kristy Imel is the assigned prosecutor.

The case was investigated by the Paso Robles Police Department with the assistance of the District Attorney’s Bureau of Investigation. 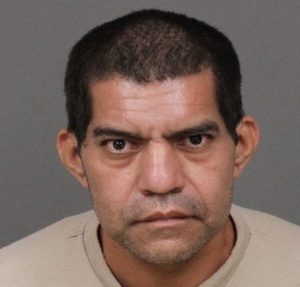 –43-year-old David Rodriguez Hernandez, a suspect in a 2013 murder-for-hire case out of Paso Robles, is now in custody in San Luis Obispo County, according to multiple reports.

He was booked on Jan. 30 on multiple charges, including murder, conspiracy, robbery, assault with a deadly weapon and inflicting great bodily injury.

Hernandez, who has reportedly been on the run for six years, was extradited from Mexico to face prosecution for the Feb. 2013 shooting death of Victor Sanchez, 37.

Reports say Sanchez’s ex-girlfriend, Maria Fajardo, paid thousands in cash to injure him. Sanchez’s nose and arm were broken when he was attacked by Hernandez with a tire iron. She then paid to have her former lover kidnapped and shot in the kneecaps, reports say. He was gunned down in front of his Paso Robles apartment complex.

Fajardo was convicted of robbery, assault with a deadly weapon and second-degree murder and sentenced to at least 21 years behind bars. He plead not guilty to the charges.