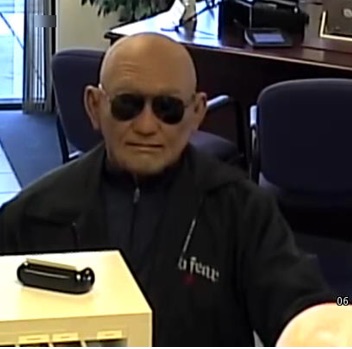 The suspect was described as a male, wearing all dark clothing, gloves, and an “old man” mask with sunglasses.

–On Friday at about 4:56 p.m. The San Luis Obispo Police Department responded to a report of a robbery that had just occurred at the US Bank located at 3991 S. Higuera.

Officers responded to the area, but the suspect fled prior to their arrival. A search was conducted of the surrounding shopping center and adjacent neighborhood, but the suspect was not located.

During the investigation, officers reviewed the banks surveillance camera and located the images of the suspect shown below. The suspect made off with an undisclosed amount of cash. No one was injured during the incident.

If you have any information about this or similar crimes, please call the San Luis Obispo Police Department at (805) 781-7312 or Crime Stoppers at (805) 549-STOP.
SLOPD utilizes Nixle as an electronic information sharing system. Refer to www.nixle.com.