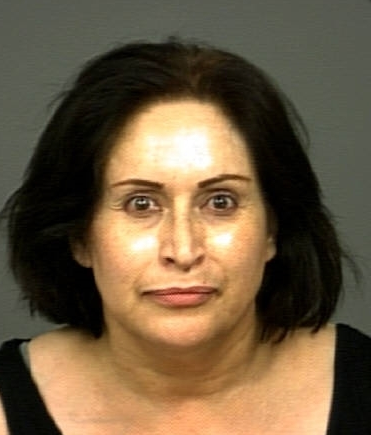 Padilla, known as the ‘Central Coast Bandit” pled no contest to all of the charges including four counts of robbery, an attempted robbery, one count of second degree commercial burglary, one count of evading a peace officer, and one count of assault with a deadly weapon. She also admitted having been convicted of a “strike” prior based on a First Degree Burglary conviction in Monterey County in 2005, the D.A.’s office reports.

When Padilla returns for sentencing in Judge John Trice’s court room on March 3, she will receive a 16 year sentence, the announcement says. It is anticipated that she will subsequently receive an additional two years in Monterey County, and two years in Stanislaus County for crimes committed in those counties, for a total of 20 years in state prison.

Since some of the crimes of which Ms. Padilla has been convicted are defined as “violent strikes”, her conduct credits will be limited to 15 percent.

Updated report Aug. 28, 2014: A woman identified as Cristina Fernandez Padilla, 50, of Watsonville, CA, has been arrested for a series of bank robberies along the Central Coast and in Modesto. Dubbed the “Central Coast Bandit,” Padilla is believed to be involved in 6 robberies and 1 attempted robbery.

The San Luis Obispo County Sheriff’s Office announces the conclusion of a multi-agency coordinated effort to capture the “Central Coast Bandit” which culminated Friday, August 23, 2013 following a series of events which began in the city of San Luis Obispo.

Just before 5 p.m., a woman matching the description of the “Central Coast Bandit” entered the Golden 1 Credit Union at 852 E. Foothill. Prior to robbing the bank, the woman was recognized and walked out to a parked vehicle. As she left, the vehicle description and license plate was provided to the San Luis Obispo Police Department, who located the vehicle driving in their city. When officers attempted to stop the vehicle it fled and they pursued it Northbound Highway 101 to the top of the Cuesta Grade.

The suspect vehicle was later spotted on Highway 101, still Northbound, by the Atascadero Police Department, who initiated a second pursuit. This pursuit continued through their city, at times leaving Highway 101 and entering surface streets and parking lots. As the vehicle continued Northbound, the California Highway Patrol took over the pursuit, which ended in a collision near 35th and Pine Streets in Paso Robles, after reaching high speeds on surface streets there, including one intentional ramming of a civilian vehicle at an intersection near 24th and Riverside.

A woman matching the description of the “Central Coast Bandit” was taken into custody. She was identified as Cristina Fernandez Padilla, 50, out of Watsonville, CA. Padilla was taken to the Paso Robles Police Department.

Following interviews, she was arrested for the robberies committed in Atascadero, Nipomo, Paso Robles and Pismo Beach. She was also arrested for felony evading and assault with a deadly weapon other than a firearm for the pursuit and intentional ramming of a vehicle in the City of Paso Robles. She was booked into the San Luis Obispo County Jail without incident, with bail set at $290,000. 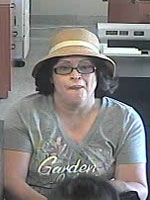 Authorities said Friday the woman suspected of binge the “Central Coast Bandit” was apprehended and is in FBI custody after crashing her car in Paso Robles.

San Luis Obispo police Lt. Bill Proll said the woman, possibly a resident of the Watsonville area, fled from a San Luis Obispo credit union and was chased by California Highway Patrol officers as she raced north on Highway 101 on Friday, The Monterey County Herald and SLO Tribune have reported.

Proll said no one was believed to be injured in the crash, The Herald reported. The suspect’s name was not available late Friday.

Proll said the incident that led to her arrest began shortly before 6 p.m. Friday as a woman appeared ready to rob a Golden One Credit Union in San Luis Obispo. An alert bank employee called police before she tried to do the robbery, Proll said.

He said San Luis Obispo police responded but decided chasing the woman’s vehicle across city streets would be too dangerous, especially since nothing happened in the bank. But they alerted CHP officers, who pursued the woman on the 30-mile chase to Paso Robles, where her vehicle crashed and she was arrested, he said.

As of late Friday, she was in FBI custody, Proll said, who added he was confident police have the right woman.

The FBI and law enforcement in San Luis Obispo, Monterey, and Stanislaus counties have been conducting a joint investigation. During the robberies, the suspect enters the bank and presents a demand note to the victim teller. She has been seen bank surveillance photos wearing eyeglasses, a variety of hats, and casual clothing. In some of the robberies, the suspect has indicated she may be working with other individuals located outside the bank. No other suspects have been described by witnesses at this time.

The Central Coast Bandit is further described as an Hispanic or white female, with dark hair, between 5’5”-5’6” tall, 150-160 lbs., and between 35-45 years old. The suspect has been seen carrying a pistol during some of the robberies and, according to witness accounts, has been seen leaving bank robberies in what has been described as either a gray sedan or gold-colored SUV.