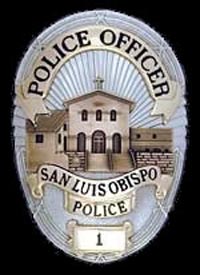 –On May 30, 2017, San Luis Obispo Police officers responded to Rocket Fizz Downtown San Luis Obispo for a report of a weapons offense. The reporting party stated the suspect brandished a knife and threatened him.

The reporting party described the suspect as follows:

White male, 5′-8″ tall, 150 pounds, short blonde hair, short scruffy beard, wearing a thigh-length heavy brown jacket, dark athletic shorts, and a black athletic-type drawstring backpack. The reporting party believed the suspect was possibly a transient. The reporting party stated he recognizes most of the transients downtown, but said that this individual appeared to be new to our area.

The suspect description is very similar to a suspect who recently vandalized two vehicles in downtown parking structures. The damage to the two vehicles was extensive, including deep marks which appeared to be caused by a knife and a puncture to the door.

Please contact the Police Department at (805) 781-7312 immediately if you come across a suspect matching this description, or know who it might be. Based on the location of these three crimes (Marsh structure, 700 block of Marsh, and 600 block of Higuera), the police believe this person is likely staying in the downtown area.