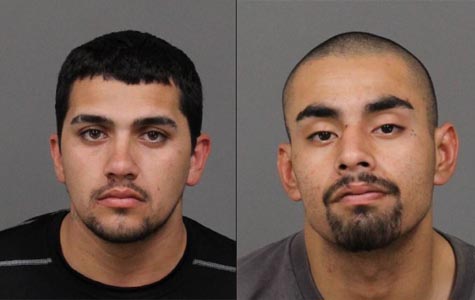 –The San Luis Obispo Police Department has arrested two suspects for assault with a deadly weapon on a police officer, burglary, and other charges. On Feb. 1 shortly before 2 a.m., an alert citizen called the San Luis Obispo Police Department to report a U-Haul box truck with a driver and a passenger. The caller reported the U-Haul passenger had exited the truck and used something to break the windows out of a vehicle parked in the 2900 block of Augusta in San Luis Obispo. The suspect removed items from the parked car and the U-Haul left the area.

Responding officers located the U-Haul driving down Ella Street. Officers activated their emergency lights to detain the suspects and when they did the U-Haul accelerated quickly and drove directly towards the officer’s driver’s door. The officer was able to take evasive action and narrowly avoided being hit by the suspect’s truck. The U-Haul collided with a parked car that was immediately adjacent to the officer’s driver’s side door. The truck was later located a short distance away and the suspects were gone. Once the U-Haul was secured by officers they discovered items of suspected stolen property from several recent vehicle burglaries. Also in the truck was a motorcycle suspected of being stolen.

Documents and fingerprints located in the U-Haul helped investigators identify the suspects as 24-year-old Antonio Tanner-Galvan, and 22-year-old Alberto Macias. Both are residents of Santa Maria. Tanner-Galvan is a suspect in approximately 10 other stolen vehicle investigations being conducted by the San Luis Obispo Police Department. Each of those cases involve motorcycles and several include the theft of trailers.

On Feb. 2, Santa Barbara County Sheriff’s Detectives working with San Luis Obispo Police Detectives located and arrested both Tanner-Galvan, and Macias as they were driving in Santa Maria. Both suspects were taken into custody without incident. Investigators are still working to determine if these suspects are related to the series of window smash burglaries reported along the Los Osos Valley Road corridor in recent weeks.
Both suspects were booked into San Luis Obispo County Jail on the following charges;

If you have any information related to either suspect or these crimes you are encouraged to call the San Luis Obispo Police Department at (805) 781-7312 or Crime Stoppers at (805) 549-STOP.