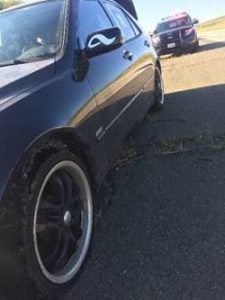 –On March 15, at approximately 8:26 a.m., an Atascadero Police Officer conducted a traffic stop on a vehicle for traveling at an unsafe speed on El Camino Real. The vehicle failed to yield to the officer and a pursuit ensued.

APD officers pursued the vehicle north on US Highway 101 along with the assistance of the California Highway Patrol from the Monterey Division. The CHP air operations unit also assisted. The CHP’s successful deployment of a spike strip helped to bring the pursuit to an end just south of King City. The pursuit traveled 53 miles and lasted for 31 minutes. Speeds during the pursuit reached nearly 130 MPH.

Two suspects were taken into custody and booked at county jail. Driver Jeffrey Branes, 37-year-old, charged with felony evading an officer and a parole warrant. Passenger Crystallynn Burgess, 39 years old, was charged with a violation of probation terms.