Suspects wanted for connection to multiple acts of theft 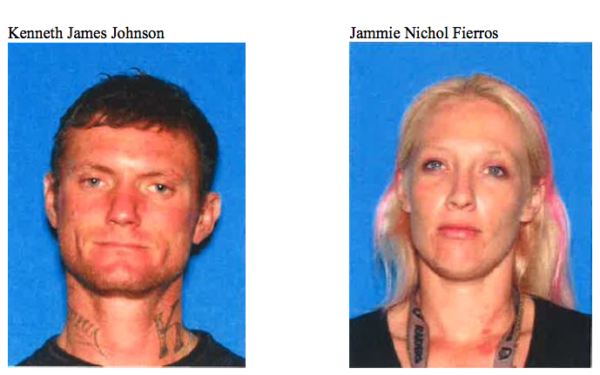 Suspects are likely to still be in the area, says Sheriff’s Department

On Jan. 15, 2018, at about 4 p.m., a San Luis Obispo Police Officer attempted a traffic stop on a car in the 1000 block of Peach. The male driver and female passenger immediately fled on foot into the nearby residential neighborhood. A search by officers, including a K-9 unit from Cal Poly PD, was unsuccessful in locating either suspect. Stolen property from an unreported residential burglary in Santa Margarita, along with drug paraphernalia, was located in the car. The car was reported stolen from Bakersfield on Jan. 8, 2018, and later returned to its owner.

At about 4:30 p.m., two subjects matching the driver and passenger from the Peach traffic stop were seen in the area of the 800 block of Buchon where it is believed they entered a detached garage and stole bicycles, skateboards, and a backpack. Video from a nearby surveillance camera showed a male and female matching the general description of the suspects riding the victim’s bicyles in the area.

On Jan. 16, 2018, at about 9:55 a.m., the victim from the 800 block of Buchon was driving to the Police station to provide additional information about the burglary, when he saw the male suspect riding a bicycle and carrying one of the stolen skateboards in the area of Osos and Mill. The victim confronted the suspect who dropped the skateboard and attempted to flee. Officers responded and chased the suspect on foot while additional officers set up a perimeter in the area of Chorro and Walnut. Again, a K-9 unit from Cal Poly PD responded but could not locate a scent to track.

At about 12:30 p.m., a resident of the 800 block of Walnut called and reported a residential burglary. From evidence collected at the scene, it is believed the suspect was the same male who ran from the police in both of the earlier cases. The suspect stole two laptop computers, jewelry, and a backpack.

After analyzing evidence collected at the multiple scenes, officers were able to identify the male suspect as Kenneth James Johnson. Through further investigation, the female suspect was identified as Jammie Nichol Fierros. In addition to her involvement in these crimes, Fierros has a $45,000 outstanding warrant for fraud out of Kern County.

The Sheriff’s Office believes that the suspects are still in the City of San Luis Obispo. They are wanted for suspicion of vehicle theft, possession of stolen property, and residential burglary.

If you have any information or have seen either of these suspects, you are urged to call the San Luis Obispo Police Department.