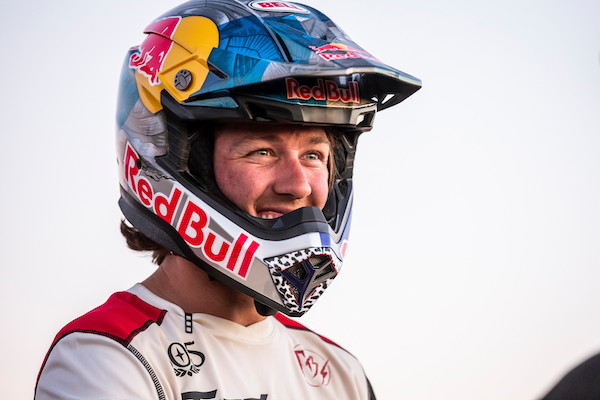 –The rolling hills of Kansas were alive with the sound of revving engines and the sight of dirt bikes sailing through the air as the inaugural Red Bull Imagination competition got underway just outside Fort Scott. The event, born from the mind of freeride athlete and Templeton native Tyler Bereman and brought to life by course designer Jason Baker of Dream Traxx, marked a major step forward for the sport of freeride motocross. Some of the sport’s top riders showed up to compete, braving the massive jumps and showcasing their own personal riding style on the innovative course in the process. Although not without heated competition, Bereman was able to bend his brainchild course to his will and secure a first-place finish in the event. 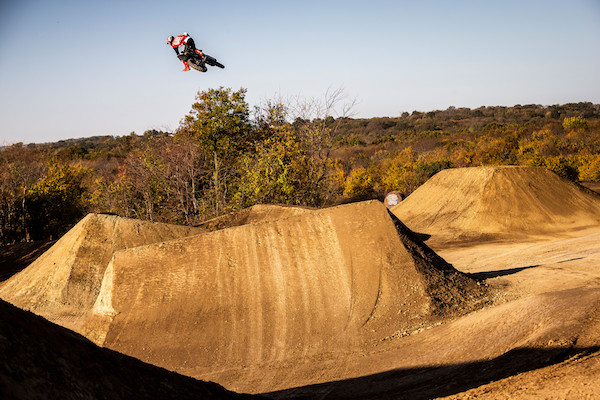 Progression is not often easy and is at times downright scary. Baker and Bereman designed a course that was so innovative that at first many of the competitors were a bit apprehensive about actually riding it. But the contest format was set up to accommodate this, with three “sessioning” days set aside for riders to adjust to the unique sections before culminating with a final-day contest. And despite the initial unease, once the riding began, it was all smiles under the riders’ helmets as they had a blast ripping around the ultimate freeride playground.

Carved into the Midwestern landscape, the course was unlike anything seen before in the sport of freeride motocross and its construction a story in itself.

Some stats on the build:

The lineup of riders who took to the course at the beginning of the week was:

The three days of session riding led to a single-day competition, where each rider had two five-minute windows to showcase their talent in crafting the perfect line. Bereman, Ryan Sipes, Cole Seely, and Colby Raha all suited up for the main event, with the remaining riders sitting out. Legends of the sport Ronnie Renner, Jeremy ‘Twitch’ Stenberg, Robbie Maddison, and Steve Haughelstine judged the contest from a tower overlooking the entire course and scored riders on more than just the number of tricks in their run. Creativity, technical ability and the way each rider adapted the course’s features to showcase personal style were also factored into the final score.

From the get-go, Bereman showed why the course was his brainchild, as he executed every jump perfectly with confidence and style. Raha followed by using classic tricks form the early freeride days, including a double can can over the 140 foot ‘big dawg’ jump. Sipes brought his methodical racing background to the table, impressing everyone with extremely clean runs and strong scores.

But round two basically became a shootout between Bereman and Raha, who both stepped the competition up a notch. Bereman used every inch of the east side of the course with creative, technical transfers off the main line, highlighting some of the untapped potential of the course. Raha responded with aggressive style and skill, including a very technical dirt-to-dirt backflip in the ‘shark fin’ section. But ultimately Bereman’s course mastery outweighed Raha’s intrepid approach, leaving him with a score of 96 and sealing the win for Tyler with a 97.

Vicki Golden and Darryn Durham sat out of the competition as Golden experienced a rough landing the second day of practice, causing an old injury to flare up, while Durham overjumped the 140 foot “big dawg,” smashing his front wheel and leaving his ankles too sore to compete. And Tom Parsons went over the bars while warming up the morning of the competition, injuring him enough to be reluctant to contend with the strong and unpredictable winds of event day.

The final scores for the event were as follows:

Regarding what Red Bull Imagination means for the future of freeride motocross, Bereman said, “Everyone keeps saying it was the most fun stuff that they’ve ever ridden, so this is a good place to start and hopefully we can build on it and bring it back, inviting more people and showcasing what we do and why we do it. I’m just stoked to see where this thing takes us, and where it goes.”

Viewers can now tune in to the exclusive behind-the-scenes series on Red Bull Motorsports YouTube and Red Bull TV. Red Bull Imagination will also air as a 60-minute highlight program as part of the Red Bull Signature Series on FOX – exact airdate to be announced shortly.