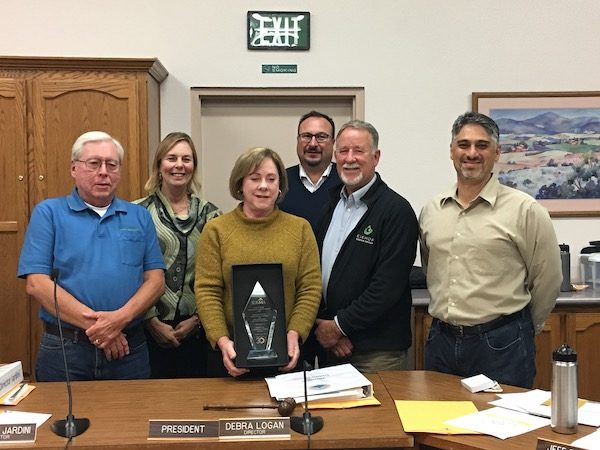 –The Templeton Community Services District received two awards from the Special District Risk Management Authority (SDRMA). The district received the 2019 Earl F. Sayre Excellence in Safety Award Property/Liability Program – Large Member Category from the Special District Risk Management Authority (SDRMA) Board of Directors. Templeton Community Services District was selected as a result of its low loss ratio, longevity in the SDRMA program and having no reported or paid claims in the last five program years. Templeton CSD was one of only two special districts to receive the award for 2019. Templeton CSD Director Geoff English accepted the award on behalf of the district at the Sept. 27, 2019 awards ceremony at the California Special Districts Association’s annual conference in Anaheim, CA.

The second award was for the President’s Special Acknowledgment Award from the Special District Risk Management Authority (SDRMA) to formally acknowledge the dedicated efforts of the Templeton Community Services District’s governing body, management and staff towards proactive risk management and loss prevention training.

The award is to recognize members with no “paid” claims during the prior five consecutive program years in SDRMA’s Property/Liability Program. It is through the efforts of members such as Templeton Community Services District that SDRMA has been able to continue providing affordable property/liability coverage to over 500 public agencies throughout California.

The Special District Risk Management Authority is a public agency formed under California Government Code Section 6500 et seq. and has provided a full-service risk management program for California’s local governments for over 30 years.