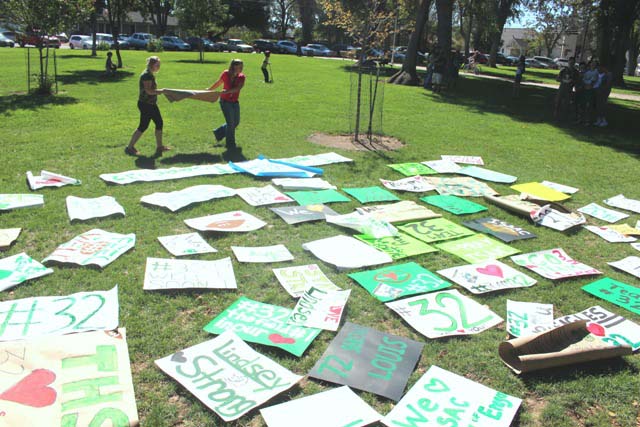 A large crowd, about 300 in all, turned out at Templeton Park on Sunday to paint banners and show their support for injured Templeton High School football player Isaac Lindsey. Photo by Penny Fuentes.

– When Isaac Lindsey was injured during the fourth quarter of the Templeton and San Luis Obispo high school varsity football game on Friday night, a wave of shock and disbelief spread among those in the stands and on the field. Now, as Lindsey, a junior at Templeton High School, is being treated at Sierra Vista Regional Medical Center, people throughout the Templeton community and throughout North County are rallying together to raise funds and led support to his family. 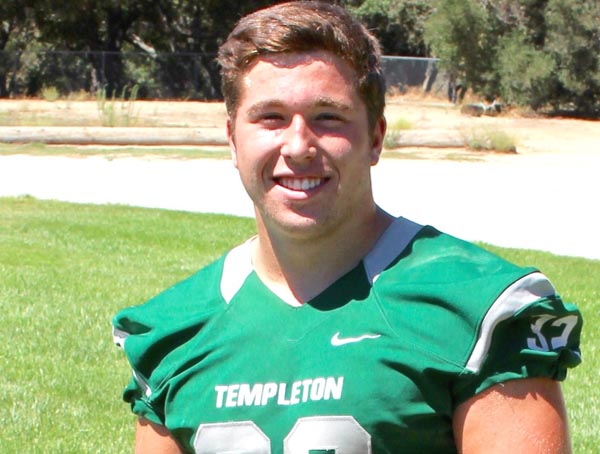 Immediately following the game, the emergency room at the hospital was filled with Lindsey’s friends, family, and well-wishers, according to a family friend. Within hours, an online donation site was activated to help the family with medical and daily expenses. By Saturday morning, there were fundraisers being planned and activities being organized.

“The family is going to need a lot of financial help so my mom thought it would be nice to have a site set up that would allow other people to make donations,” said Nate Avery, Lindsey’s teammate and best friend. “It’s been just amazing to see how the funds have accumulated in such a short time.” 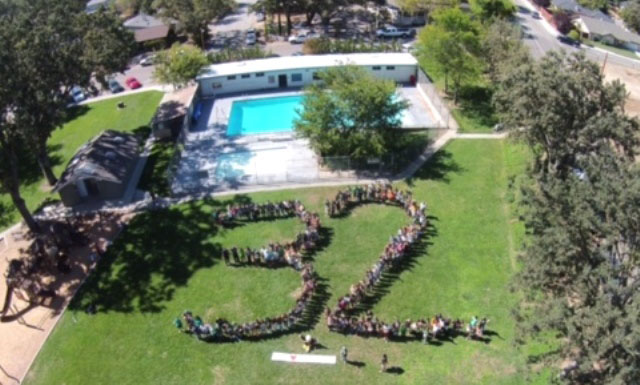 The crowd assembles their bodies in the shape of the number on Isaac Lindsey’s football jersey – 32 – at Templeton Park. Drone photo courtesy of Ian Hayes

As of 9 p.m. on Sunday, less than 48 hours after Lindsey’s injury, the Isaac Lindsey #32 Go Fund Me page set up by Tanya Marshall Avery, www.gofundme.com/4h4j3ej5, had seen over $60,000 in donations. The page reads: “Isaac was injured playing the game he loves, football, with all of his ‘brothers.’ This sweet, loving young man is currently in the hospital fighting to get better. Please help support the family in their time of need as Isaac has quite a road to recovery ahead of him. Hospital bills and time off work can be offset by our help and support. At this time please limit texts, calls, and emails to the family so that they can focus on Isaac…thank you for all of your generous donations and support.” 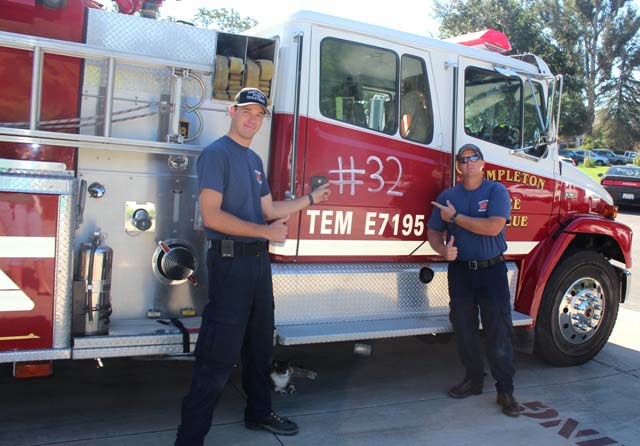 For about five hours on Sunday, a large crowd, about 300 in all, turned out at Templeton Park to paint banners, take photos, and assemble bodies in the shape of the number on Lindsey’s football jersey – 32. The banners were plastered up on fences, along the roadways, and on business fronts throughout town as well as inside and outside Templeton High School.

Later in the afternoon, a crowd gathered to rearrange the infamous “T” on the hill overlooking the football stadium into an “I.” Photos and a video of the day’s events will be presented to the Lindsey family to show just how many people throughout the community, including his teammates and coaches, are banding together in support of this well-loved young man. 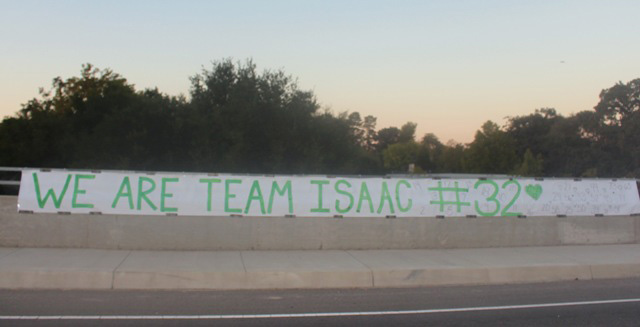 Hand-painted banners, such as this one on Vineyard Drive, are plastered up on fences, along the roadways, and on business fronts throughout town as well as inside and outside Templeton High School. Photo by Penny Fuentes

“We made a lot of posters and took a lot of pictures today,” said Avery. “We just want Isaac to know that we are here for him and we want to support him as much as we can. Isaac is just one of those guys that everyone knows and everyone loves.”

With a goal of making the day a happy one, Avery said he was in amazement at the outpouring of support from so many people – some that personally know Lindsey and some that may not but wanted to just lend a hand. 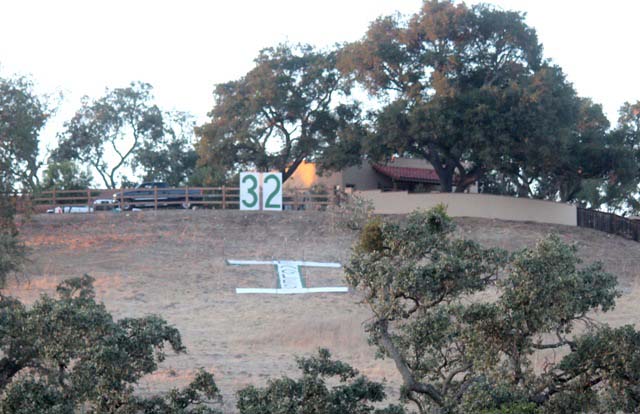 The infamous “T” on the hill overlooking the Templeton High football stadium has been rearranged into an “I” as a gesture of support for Isaac Lindsey. Photo by Penny Fuentes

“That’s what Isaac would want, for us to be having a fun, happy time together,” said Avery. “Isaac has a way of bringing people up if they are down, he always has a smile on his face, and he’s just a happy guy. If he would have been out here with us today he would have had the most fun out of all of us. So we were all happy to be together, and we showed a lot of love for Isaac and the entire Lindsey family. We did a lot of praying, we gave thanks, and we got a lot accomplished – but overall our goal was to be happy.” 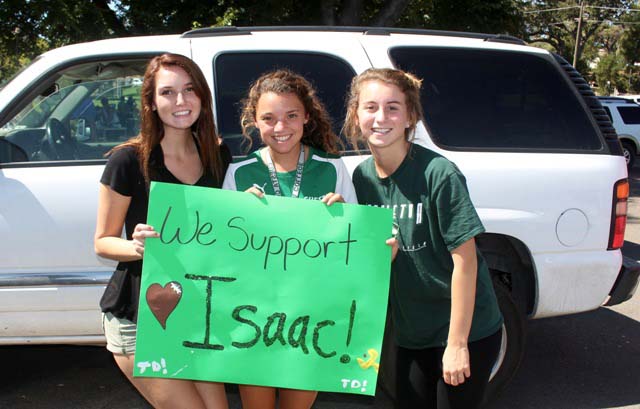 One of Isaac’s best friends and classmate, Shelley Fuentes, said, “Isaac is the most passionate, caring, sweetest, loving person I know. He always knows how to put a smile your face and I know the community coming together for him and his family means the world to him.” 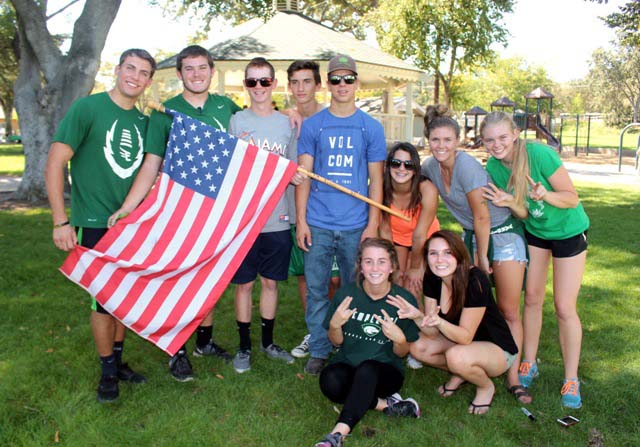 A drive-through barbecue fundraiser is being organized for Oct. 4, with ticket presales and opportunities to help underway. In addition, Team Isaac t-shirts have been designed and will be available at Templeton and Paso Robles high schools this week with suggested donations of $10.

For more information on fundraisers and other activities being planned to show support for the Lindsey family, check out the Team Isaac Facebook page at www.facebook.com/isaaclindseytempleton.

For about five hours on Sunday, a large crowd, about 300 in all, turned out at Templeton Park to show support for injured football player Isaac Lindsey and his family. Photo by Annette Stemper