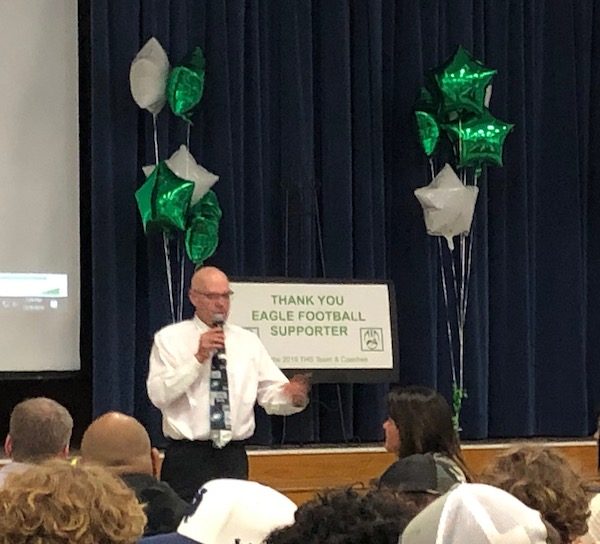 –The Templeton Eagles held their annual football banquet Monday night at the Eagleteria at Vineyard Elementary School. Coach Don Crow praised the team for their Ocean League Championship and 10-2 record. During the season, the Eagles beat several previously undefeated teams, including highly-touted Carmel and St. Bernards, a private Catholic school out of Eureka. They also beat the San Luis Obispo Tigers on the road.

Although the Eagles are losing some key players to graduation, many outstanding players are returning, including quarterback Tyler Kaschewski, who was one of the highest-scoring quarterbacks in the state. Central coast coaches voted to realign the conferences next fall.

Templeton will play in the Mountain League with Arroyo Grande, Paso Robles, Righetti, San Luis Obispo and St. Joseph. Most of those schools have 2-3 times the student population as Templeton High School. Templeton has 770 students. The others have 1500 to 2100 students. Only St. Joseph is smaller, with about 400 students.

The Ocean League will include the other six teams: Mission Prep, Morro Bay, Santa Maria, Nipomo, Pioneer Valley, and Atascadero.