Two new firefighters were acknowledged at the Templeton Fire Department (TFD) on Tuesday night at the Templeton Community Services District (TCSD) Board of Directors meeting. Adam Czajkowski and Jeff Cannon were sworn in and received their TFD badges.

According to Interim Chief Rod Hewitt, Czajkowski is from Southern California, stays in the TFD dorm room when in Templeton, and was brought on board as a probationary firefighter in August 2012. He has completed his CA State Fire Marshall FF1 Academy, and worked for the US Forest Service over the summer as part of a helicopter fire crew. “Adam is grateful for his time at Templeton Fire and the experience and training he is gaining while working,” said Hewitt. 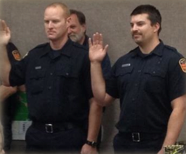 Cannon is local and has worked for TCSD for a decade. Four generations of Cannons have lived in Templeton and his mother was a Templeton Firefighter in the 1980’s. “He first met his wife Alisha in the 5th grade and she refused to date him in high school,” said Hewitt. “He and Alisha have two boys and have been foster parents for three years.”
Cannon came on board in January of this year, has completed the SLO County PCF Academy, and will finish EMT training in a couple of weeks.

“These two firefighters portray what the fire service is all about,” said Hewitt. “Community, Service, and Family…”
In the last TFD recruiting effort, a total of 18 candidates applied to become volunteer “paid call” firefighters. At least 1 is from Templeton and all are from the North County. Templeton Fire is scheduled to finish the interviewing process on Wednesday (Dec 4) and then begin the selection of candidates who will participate in a year-long training program with the Department.