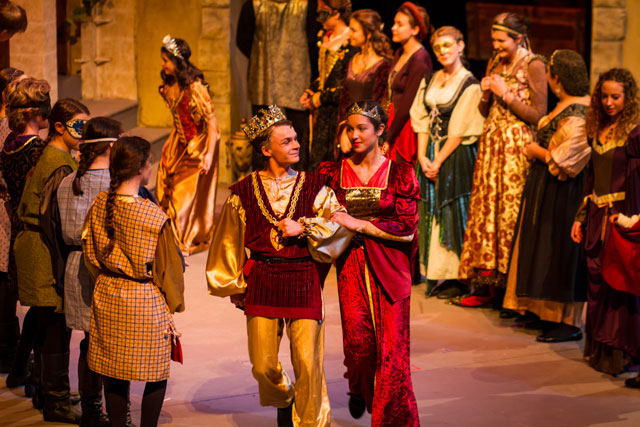 –Templeton High School’s cast and crew of “The Drowsy Chaperone” were less than two weeks away from opening night when their live performances were first delayed, then canceled because of the COVID-19 pandemic. The students were hopeful that they would be able to perform a limited, live run at the end of August, but public health conditions weren’t favorable for that. The show will go on, however! The cast of “The Drowsy Chaperone” have prepared and recorded selected numbers from the show for video streaming.

In theatre, the vast majority of costs and effort are expended before the show opens, and without the proceeds from ticket sales, there is no way to make that money back. Virtually 100-percent of the drama department is funded from ticket sales and fundraising activities-not the school budget. Figuring out how to recoup the money expended to produce a show that will not generate any ticket sales is part of the problem-solving process.

To help replace the ticket sales income lost by the canceled performances of “The Drowsy Chaperone”, drama students are bringing back a fan favorite! In 2014, THS Drama produced Shakespeare’s “Romeo and Juliet”.

“The staging and costumes were fantastic and the acting incredible,” the drama department said in a news release. “We’ll have some extra content you didn’t see when the show was performed live, including interviews of the cast and crew. Find out what they’re up to now-six years later.”

Mark the calendar for the weekend of Oct. 16-18. The public can rent the video anytime during those days for either $15 for an individual or $45 for a family. To rent the video, click here.

In November, students will perform “Pride and Prejudice”, likely as a streamed performance. The school is hopeful that Mel Brooks’ “Young Frankenstein” will be performed live, and in-person at the TPAC in March 2021.

Like most other schools, Templeton High School and the Templeton Performing Arts Center were not prepared to provide streaming services at the time the pandemic began, and are currently working toward that goal. New equipment, software, and skills are being acquired with the goal to provide this service for “Pride & Prejudice”. Community support will go a long way toward helping make this possible.

This year, students will be working hard to bring entertaining performances to our community one way or another-anything from live performances in the TPAC or outside, to streaming performances-live or prerecorded. THS Drama is seeking sponsors to ensure that THS can continue to provide a top-notch theatre arts education for local youth.