Paso Robles News|Tuesday, January 21, 2020
You are here: Home » Crime » Templeton man arrested at Jack in the Box for weapons, meth pipe, being under the influence

Templeton man arrested at Jack in the Box for weapons, meth pipe, being under the influence 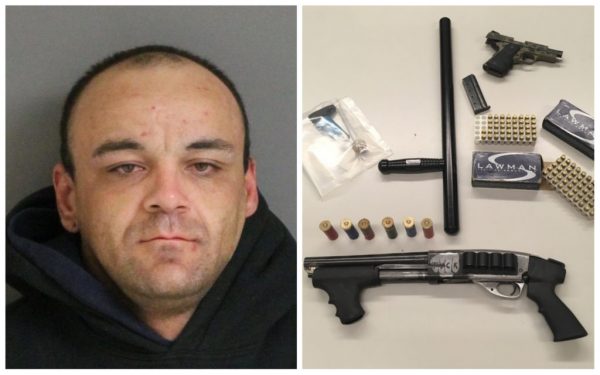 –Kyle Kenneth Hogue, 32, a Templeton man, was arrested Friday night at an Orcutt Jack in the Box after reports say Santa Barbara County Sheriff’s deputies found a methamphetamine pipe in his jacket and weapons including a sawed-off shotgun in his backpack.

At about 10:15 p.m., Friday night, deputies went to the parking lot of the Jack in the Box in the 5000 block of Orcutt Road in Orcutt and reportedly observed that Hogue appeared under the influence of a controlled substance.

Hogue was arrested and when deputies searched him, they found a glass pipe used for smoking methamphetamine in his jacket, as well as a loaded 9 mm pistol without a serial number, a sawed-off 12-gauge shotgun with no serial number, a PR-24 police baton, 100 rounds of 9 mm ammunition and six rounds of 12-gauge ammunition in Hogue’s backpack. Hogue was taken to the Santa Barbara County Jail