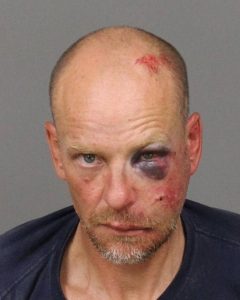 –Jeremy Christensen, 42, of Templeton was arrested at 3 p.m. on Tuesday, June 7 in San Luis Obispo, near Broad Street and El Capitan Way, and is suspected of attempting to steal a $5,000 bicycle.

Two witnesses who observed the attempted theft alerted the owner. After confronting Christensen, the owner and a witnesses attempted to prevent him from fleeing until police arrived. Police responded to reports of a physical altercation, according to a City of San Luis Obispo Police Department press release.

Christensen was in possession of bolt cutters, which he allegedly used to break the lock securing the bike to a rack on the owner’s vehicle. Officers also allegedly discovered a hypodermic needle, reports say.

Christensen was arrested on suspicion of grand theft, possession of burglary tools and possession of paraphernalia. He was being held at San Luis Obispo County Jail in lieu of $20,000 bail.