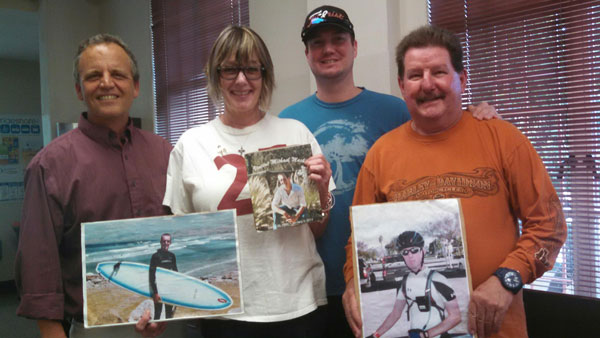 My son Vincent Michael Mack was killed on January 1, 2012 due to a seizure. He ran into the oak tree right outside of Heritage Ranch gates where we live, on his way home. Our family was and I am still devastated. For three years I decorated that tree, for the seasons and holidays, which you may think is stupid, but somehow it was therapeutic and gave me some kind of comfort that people would see his cross (by the tree) and remember him, or to slow down and drive safe. The tree was titled: Vincent’s “New Life Tree,” as we know he is with the Lord in his new life. He was a Cal-Fire volunteer off and on for three years, attended Cuesta College, Santa Ana Sheriff Academy, and Paso Robles High School where he excelled in helping others, along with participating in baseball and football. 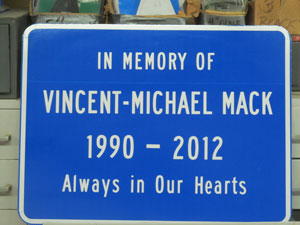 This last middle of December, I received a letter from the SLO County Works Department telling me I had 10 days to pull out my cross and all my decorations I had up for Christmastime off the tree. I cannot decorate my house since losing him, as the last Christmas with him just runs like a movie in my head over and over. So I decorate the oak tree, the last place he was alive. If you can, imagine how sad and distraught I was.

It was Christmas time, and a few weeks before the 3rd anniversary of his untimely death. I will never recover from this tragedy. It is the worst thing that could happen to a mother. I called the encroachment permit engineer, Mr. Glenn Marshall. I yelled at him, cried at him, and yelled some more.

After telling me I could have an extension from the 10-day time frame, due to the circumstances, they immediately told me I could have my own sign, honoring my son right across from the tree where he died. We also asked if we could adopt that road, in Vincent’s name as it was up for adoption, to clean the litter in that area several times a year.

The county had the signs up in less than 10 days from my original phone call. Ms. Julia Meyers was assigned to me as my personal helper to plan the sign and what I wanted it to say and how it would read. I can’t even try to count the times she phoned me asking me if I was alright, how sorry she was and how she wanted the signs to be just as I wanted them.

I just want readers to realize that there are people out there that care and make an extra effort for those who need it. Never underestimate the compassion even strangers carry in their hearts even in these crazy days. God bless you San Luis Obispo County Public Works Department, especially Mr. Marshall, Julia Meyers and the good men who put up our sign.