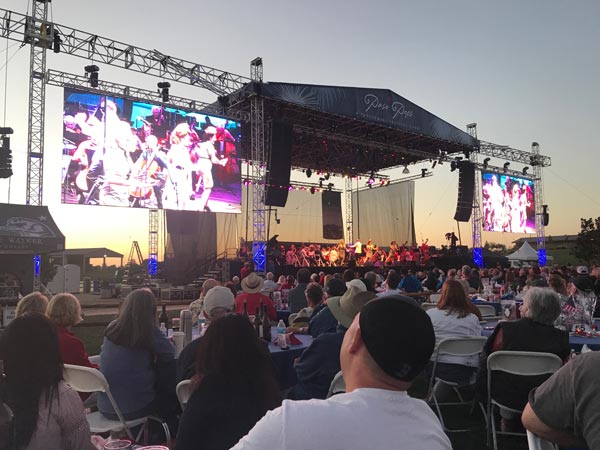 The stage at Paso Pops was filled with entertainers. Photo by Marc Coons.

The second annual Paderewski-sponsored Independence Day celebration, Paso Pops, put on a show to 4000 guests who celebrated at the Paso Robles Horse Park on July 1.

From 5-7:30 p.m., wine enthusiasts flooded the tasting section of the park to sample wine from over 40 featured local wineries. Children were invited to explore the San Luis Obispo Symphony Musical Petting Zoo and interactive arts activities, which were put together by Studios on the Park and the Paso Robles Youth Arts Foundation.

Festival attendees settled down on the lawn and at their designated tables to enjoy meals pre-ordered from the Allegretto Vineyard Resort, visit food trucks such as Brat Shop, Kona Shaved Ice and World BBQ or unpack their own picnic.

“It’s a very fun event, great wine [and] beer… it’s our first time here,” said Bobby Bracy and Josey Hernandez, who were looking forward to the fireworks display at the end of the evening.

An exciting addition to this year’s Paso Pops was a raffle, with the grand prize being a New Year’s Eve LA experience led by former LA Rams player Dennis Harrah, including transportation from Tesla, wine and food from Cass Winery and tickets to a Rams/49ers game. Second prize will escort its winner around Paso Robles with the sponsorship of SummerWood Winery & Inn, Mistura Restaurant and Cass Winery. Third prize was a luxurious experience by the River Oaks Spa, Hotel Cheval and the Paso Robles Inn restaurant, The Steakhouse. All proceeds will benefit local non-profit youth arts programs, with individual tickets selling for $50 and a deal of three tickets for $100. 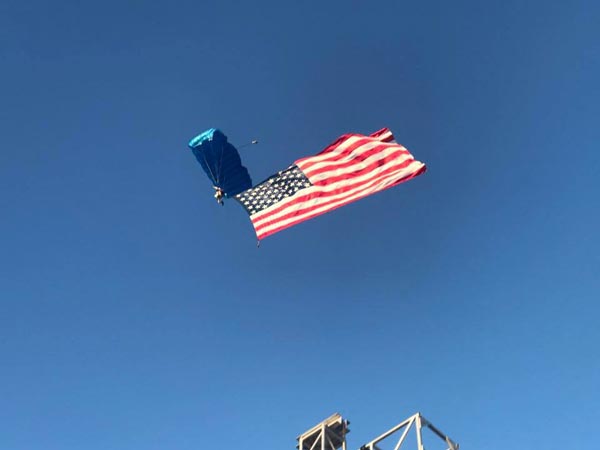 To begin the show, master of ceremonies Casey Biggs skydives his entrance. Photo by Marc Coons.

To start the performance, Paso Wine Man and emcee Casey Biggs parachuted with an American flag towards the field to cheers from the crowd.

Towards the end of the event, the San Luis Obispo Symphony and members of the Youth Symphony, led by guest conductor Christopher J. Woodruff, commenced their “Pops” program. For 90 minutes, guests enjoyed pieces such as “America the Beautiful” by Ward and Dragon, “Variations on a Shaker Melody” by Aaron Copland and a stunning finale of Tchaikovsky’s “1812 Overture”, accompanied by cannons and fireworks. 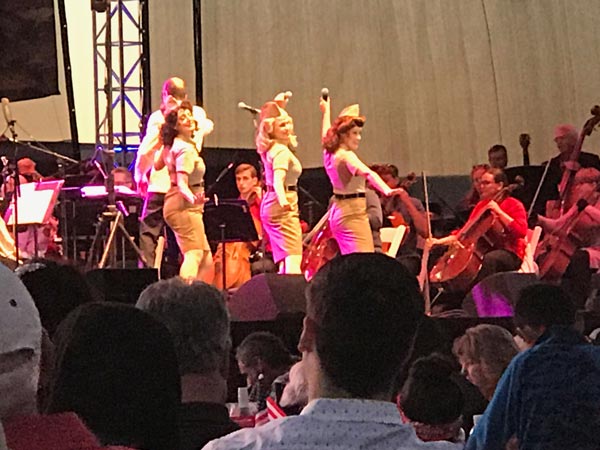 Performers on stage at Paso Pops. Photo by Marc Coons.

Other performances included The Swing Dolls of Los Angeles with “Boogie Woogie Bugle Boy”, “Salute to the Armed Forces” among others, and Jack Raventos with Rachmaninoff”s “Prelude in G, Op. 23 No. 5” and Sarah Girges with Chopin/Liszt’s “The Maiden’s Wish”, the winners of the Paderewski Festival Youth Piano Competition. Alodie Ayers, the Singing Hands Children’s Choir and Paso Robles High School Advanced Choir sung the “Star-Spangled Banner”. The after party music following the fireworks show was led by Ricky Montijo and the Mojitos.

“I’m so excited it’s here… 11 months in the planning,” said Joel Peterson, who is Treasurer on the Board of Directors for the Paderewski Festival, adding that traffic was not an issue and the weather was favorable. 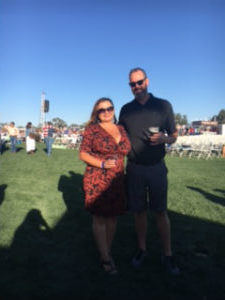 Josey Hernandez and Bobby Bracy, of Atascadero at Paso Pops.

Editor’s note: This story has been updated to reflect this event was the second annual, not third.