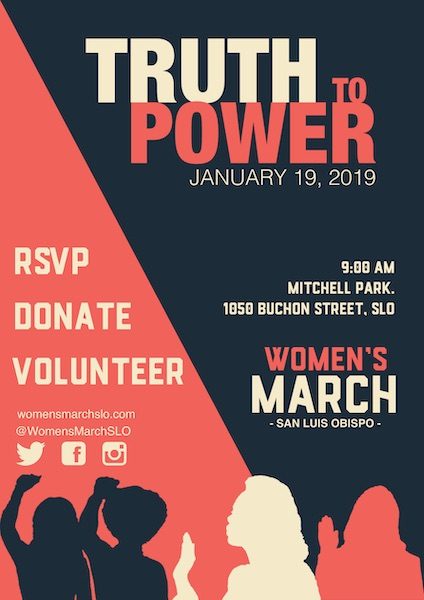 –On Jan. 19, 2019, San Luis Obispo will join thousands of women and allies for the third annual Women’s March. Well over 100 marches are planned for cities across the country and around the world. Starting at 9 a.m. in Mitchell Park with a rally, the event will continue with a march through San Luis Obispo downtown. Local nonprofit organizations will be present from 8 a.m.-12 p.m. in Mitchell Park, inviting people to get involved in the community.

WMSLO organizers chose “Truth To Power” as the theme for the 2019 event after reflecting on the events from the previous year. “From the women who spoke against Larry Nassar, to the journalists who have been under constant fire for reporting facts, to all the victims of violence and assault who spoke out during the “why I didn’t report” and “me too” movements, we know that there is nothing more important than to continue speaking our truth and hold those in authority accountable,” said Andrea Chmelik, WMSLO Communication Director.

In what was dubbed the “Year of Women,” women played a bigger role in 2018 midterm election than they have in any other election in American history, with a record-breaking number of women candidates running for office. “Women are galvanized and more organized than ever, claiming their seat at the table. The spark that ignited the movement in 2016 was explosive, but it is just as important to keep that fire burning and make sure we continue our work toward a more equitable future,” said Dawn Addis, WMSLO founder and newly elected member of Morro Bay City Council.

Over the past two years, Women’s March SLO organizers and marchers have come together for over twenty safe and welcoming events, from large marches with thousands of people to smaller but highly meaningful gatherings.

Organizers are asking for donations to help offset the cost of the march. Donations can be made online by visiting womensmarchslo.com, or by sending a check made out to Social Good Fund (WMSLO fiscal sponsor) with WMSLO in the memo line to Women’s March SLO c/o Social Good Fund, POB 5473, Richmond, CA 94805.