–Former Paso Robles resident Tom Gillian passed away in his home on Cobb with his family around him on March 22, 2016. 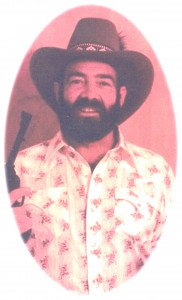 Gillian was born in Chandler, OK and grew up traveling across the United States with his parents, as his dad worked in the Oil Fields. He loved to hunt & fish and he grew up doing those things with both his mom and his dad.

Gillian graduated from Paso Robles High School in 1962. He married Linda Jeanne Danner in 1962 and they settled down to raise a family. Gillian was a man’s man who ended up having 3 little girls, and each one could wrap him around their little fingers. He was a Heavy Equipment Operator for most of his working years and there was nothing he loved more than getting on his backhoe and moving dirt.

The family moved to Lake County from Paso Robles in 1975. They moved to Cobb Mtn in 1981. He created a homestead on Cobb and he called it the “TL Land and Cattle Co.” even though he never even had one cow. He just liked the sound of it.

He was a great dad. Whenever his kids needed him, he was always there.

To say Gillian was a colorful character is putting it mildly. He was funny, fun-loving and he loved to laugh. He was never boring that’s for sure. Many who knew him could claim, “He would show up like a Knight in Shining Armor.” He had such a huge personality and he could always make you laugh.

Gillian was an only child, but had tons of cousins who were like brothers and sisters to him. “Cousin Tommy” was always the life of the party. Gillian had so many friends and some of them were friends he’d had since his childhood. Each one of his friends were very precious to him and they know who they are.

Gillian was a hell-raiser, he was an outlaw, and he was “One of a Kind.” He was loved and will be missed by all who knew him.

He is survived by his wife of 53 years, Linda Gillian. His daughter Lori Bour and husband Jeff of Kelseyville, his daughter Kimberly Gillian of Cobb. He was preceded in death by his daughter Sandi Lyndall. He also leaves behind grandchildren, Kristin Tanner (Bryce, Jayden), Jake Tanner (Venessa, Kaelynn) Paige Bour, David Lyndall, and his namesake Tommy Johns. He also leaves behind one great grandchild, Layton Butcher.

Private services will be held for the family and there will be a memorial service for Gillian once the weather gets warmer. In lieu of flowers, the family requests gifts be made to Hospice Services of Lake County, 1862 Parallel Drive, Lakeport, CA. 95453.