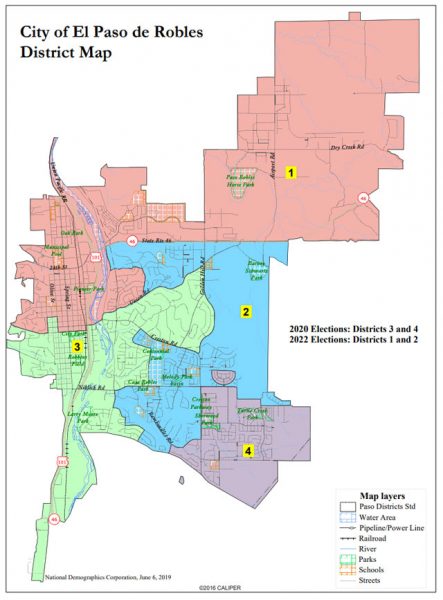 –A Consolidated General Election will be held in the City of El Paso de Robles on Tuesday, November 3, 2020, for the following officers:

Prompted by a legal challenge that alleged the city’s current City Council election system violated the California Voting Rights Act of 2002, the City of Paso Robles transitioned from the previous at-large system of electing the City Council to a by-district election model.

The City Council divided the city into four voting districts, each district represented by one City Council member from that district. The Mayor’s position remains at-large. Two of the four seats are up for election this November.

The District 4 seat is a contest between incumbent Councilman Fred Strong, seeking his fifth term in office, and Jacob Allred, a global product line manager for Weatherford. Both candidates live in the district, which is on the southeast side of town.

If re-elected I’ll try to continue to serve you equitably on the Council and eleven regional, state, and national boards and policy committees. In the past, I served as aide to three United States Senators, authored the first Civil Rights legislation of the twentieth century, helped create the Peace Corps and wrote portions of the last two national infrastructure Acts. I serve you regarding transportation, natural resources, housing and economic development here, statewide and nationally.

I’ve been directly involved with bringing over $2 billion to our area and upgraded our public safety, library and water despite losing $17 million/year in taxes due to disasters. My efforts have helped bring over 800 head of household jobs to our area while reducing the city controlled portion of your property taxes.

Teaching Political Science at a major university where I was a department head and being a county chairman for Proposition 13 to reduce homeowner taxes were helpful backgrounds for this position. I was humbled by the Presidential Award I received in 2017 for outstanding national leadership and my 2018 regional award for service above and beyond the call of duty. I respectfully ask for your vote.

My name is Jacob Allred, and I humbly ask for your support by voting for me in November 2020. As a husband and father of two special needs children, I have a vested interest in seeing our beloved town flourish. I will work diligently to ensure that Paso Robles continues its steady growth trajectory where local businesses can continue to thrive.

I will ensure that our community has access to more head-of-household jobs so that we can afford to live here, and that we have access to effective emergency services. I am concerned, without this effort, we will find ourselves unable to continue calling Paso Robles “home” as we will move to find work, more affordable homes, or safer places to live. I want our city to thrive, all while maintaining our small-town charm that makes Paso Robles so iconic. I will put my decade of experience working on complex multi-national projects to work for our city.

I ask that you allow me to act as your public servant. I will listen to your needs, advocate on your behalf, and represent you for the next four years as I serve on the Paso Robles city council with humility and gratitude.

District 3 incumbent City Councilman Steve Gregory is running unopposed in his race. Gregory was appointed to the council in 2014, and he won his first election in 2016.

When I ran for City Council, I pledged to deliver real action to make our City better. Since I have been on the Council, we have re-opened Centennial Pool and improved economic development throughout our City. We improved the Paso Robles Airport infrastructure, including a completed water and fire line, sewer capacity, and the reconstruction of Dry Creek Road. This allows full development of our airport. We are reconstructing Jardine Road and completing Union Road. As promised, we spent all of the supplemental sales tax on road improvements.

My priorities are to focus on public safety and maintain our finances in a fiscally responsible manner. I will focus on our housing shortage, and keep improving our road system. We love our life here. As a 40-year resident of Paso Robles, I raised my children here, run a business here, and made many friendships here.

I pledge to maintain our “Paso Robles Lifestyle”. With 11 years on the planning commission and the City Council, I solve problems and find viable solutions. I understand business and the needs of our community. I respectfully ask for your vote to continue to work hard for you.

I am honored to have the opportunity to ask for your vote so that I may serve the citizens of Paso Robles as the next City Treasurer. I have been a resident of San Luis Obispo County for over 30 years and am a Cal Poly graduate with a degree in Business Administration. After graduating, I worked as an Audit Manager for a CPA firm which specialized in audits of local governments, community services districts and school districts. I then became the Accounting Manager for the Cities of Arroyo Grande and Santa Maria before coming to the City of Paso Robles, where I have been for the past three years. Overall, I have over 15 years of experience related to the financial activities and aspects of local government. As the Administrative Services Director for the City, I have been able to use my unique skill set to ensure that the City continues to be financially stable by taking a long-term approach to finances as well as understanding the financial challenges. I am seeking your vote to expand my role to include investment of City funds and to ensure accuracy, compliance, and transparency of all City funds.