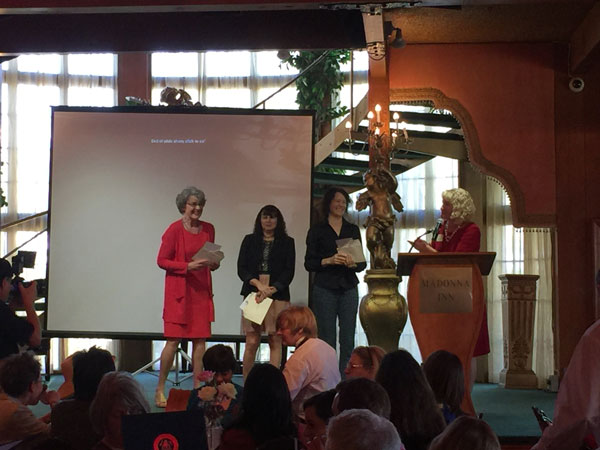 Winners named at luncheon on March 11

The Women’s Wall of Fame Luncheon was sponsored by the County of San Luis Obispo Commission on the Status of Women (SLOCSW), an advisory board to the San Luis Obispo County Board of Supervisors and the South Bay Women’s Network, an organization of county business women. Comissioners Christine Noffz and Julie Jones organized the event.

“How do we get involved?” Bermejo asked the sold-out crowd. “Whether it’s voting, volunteering, or running for local office … the voices of women are needed everywhere.”

“It’s important to recognize local women who are impacting our community in a positive way,” said Amanda King, chair of the County of San Luis Obispo Commission on the Status of Women. A total of 15 women were honored Saturday as nominees for the Women’s Wall of Fame.

The Women’s Wall of Fame award is an expansion of the annual SLOCSW  “Woman of the Year Award.” Nominations are submitted to the commission from organizations throughout San Luis Obispo County of women who have given in an exemplary way to better the lives of others throughout the year. Entries are reviewed by a panel of commissioners from outside the county.

On Tuesday, April 11, the commission will report results of its 2016 women’s survey. The public is invited to attend. All women living in SLO County are invited to take the 2017 survey online in English and Spanish on the SLOCSW website.