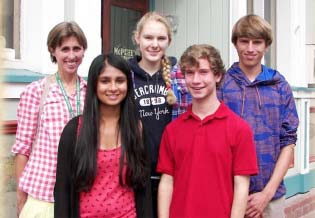 Templeton High School celebrated academic excellence on Oct. 15 with a special lunch at McPhee’s Grill in honor of the October 2014 THS Students of the Month & Featured Staff Member.

The October 2014 THS Students of the Month in alphabetical order are: Clayton Mackay, Andrew Magie, Paval Patel, and Elsa Strysko.

Junior Clayton Mackay (4.29 GPA) was nominated by THS Science teacher Jason Diodati. “Clayton Mackay is a well-mannered, soft spoken, and intelligent young man,” said Diodati. “He is excelling at both physics and engineering, and is a pleasure to have in class.”

Junior Andrew Magie (4.16 GPA) was nominated by THS Music teacher David Landers. “Andrew Magie is an extraordinary student whose impact on THS will endure long after he has graduated,” said Landers. “As a musician, Andrew has few equals. His talents and knowledge of music have established him as the premiere young oboe player of San Luis Obispo County.” “Not only does he play in the THS Concert Band, he is also the principal oboe for the SLO Youth Symphony – a position he has held for the last two years,” continued Landers. “Andrew also plays synthesizer for the marching band and oboe in a professional woodwind quartet – the other members of which are adult musicians.” “One of Andrew’s most enduring accomplishments at THS is the founding of the Gay Straight Alliance Club – a long overdue and very welcome addition to the culture of our campus,” concluded Landers.

Junior Pavel Patel (4.18 GPA) was nominated by THS English teacher Katherine Finstuen. “Pavel is a very responsible, polite and friendly student,” wrote Finstuen. “She is always good at juggling her activities, ensuring she stays caught up in class and performs at a high level.”

Senior Elsa Strysko (4.14 GPA) was nominated by THS Social Sciences teacher Erik Lewis. “Elsa always gives 110 percent, whether in the classroom or in athletics,” said Lewis. “She is a model student and I enjoy having her in class every day.”

THS Math teacher Cece Mayer is the October 2014 Featured Staff Member. “THS is so fortunate to have Mrs. Mayer as a teacher,” said THS Principal Andrew Cherry. “She is incredibly dedicated to her students, is a natural at teaching math, and her great sense of humor coupled with her ability to relate to the kids, makes her a favorite with students year after year.” “Mrs. Mayer graduated from Cal Poly and has been teaching at THS since 2007,” continued Cherry. “Her favorite thing about being a teacher is, “introducing students to the joy of math.” “When asked what her favorite thing to do when not at work she said, “…there are other things to do other than work?”.”