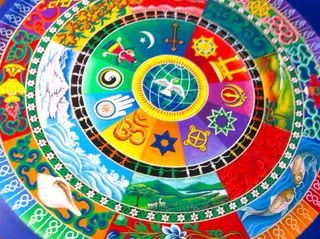 A group of Tibetan Monks from the Drepung Gomang Monastery arrived in Central California for a three-week stay from Oct. 1 through Oct. 19. Their visit is part of the 2013 Tibetan Sacred Arts Tours.

The goals of the tour are:

During their visit they will be exhibiting Tibetan Crafts, creating large beautiful sand paintings and presenting cultural pageant performances that include: dance, song, chant and a fascinating example of the debate Monks use to train their thinking. Paso Robles is their first stop before continuing south to San Luis Obispo and Santa Maria.

Participation in programs offered by the Monks is donation based. Proceeds from both donations and the sale of their artworks will support the efforts of the Drepung Gomang Monastic Institute in India, a home to over 2,000 exiled Tibetan Monks in exile.

A special Butter Sculpture Class will be presented at Oak Creek Commons. There is a $20 suggested donation. Butter sculpture is another Tibetan Buddhist art form. The sacred offering is made from mainly butter and other mineral pigments. The size of butter sculpture varies from several centimeters to several meters tableaux, covering a variety of subjects including deities, flowers, animals and Buddhist motifs. Traditionally, butter sculptures are displayed on monastery altars and family shrines as offerings. They are modeled by hand. Since butter melts easily, Monk artists making need to work in cold conditions, they have to dip their hands into cold water to make their fingers cold before they start to model. It is a work of pride for them. A few tools, such as hollow bones for making long threads and moulds for making leaves, are utilized.

The Monks will open the ceremony for the four-day Sand Mandala on October 3rd at 9 AM. The closing ceremony will take place on October 6th at 3 PM. It is best to come daily to see the beautiful designs emerge.

Sand paintings are an ancient art form of Tibetan Buddhism. Mandala is a Sanskrit word meaning cosmogram or “world in harmony.” Drawn in three-dimensional forms of sand, this art is called dul-tson-kyil-khor signifying “mandala of colored powders” in Tibetan. The mandala is an imaginary palace contemplated during meditation. Each object in the palace has significance, representing some aspect of wisdom or guiding principle. Various scriptural texts dictate the shapes, forms, and colors of the mandala. There are many different mandalas, each with different lessons to teach and blessings to confer. Most contain a host of deities, symbolic archetypes of the landscape of the mind.

In general, all mandalas have outer, inner, and secret meaning. On the outer level they represent the world in its divine form; on the inner level, they represent a map by which the ordinary human mind is transformed into the enlightened mind; and on the secret level, they predict the primordially perfect balance of the subtle energies of the body and the clear light dimension of the mind. The creation of a sand painting is said to affect purification and healing on these three levels.

Awakening Ways Spiritual Community will welcome the Monks for a Teaching and Cultural Program on October 13th at 10 AM for Buddhist Teachings. There will be a special program at 12:30 featuring Pageant events of song and dance. The Pavilion on the Lake will also be the venue for a Cultural Pageant at 1:30 PM. A donation of $20 per person is suggested. During the performance, there will be beautiful costumes, traditional music and dance.

For information about any of the programs please contact Anet Carlin at (805)466-4653 or anet@charley.net.