Controversial rocker Ted Nugent’s upcoming concert in Paso Robles has been canceled due to “unforeseen circumstances,” according to show promoter Nederlander Concerts, the San Luis Obispo Tribune reports. The news comes after similar cancellations prompted at least in one case by derogatory remarks Nugent made about President Barack Obama, the report said. 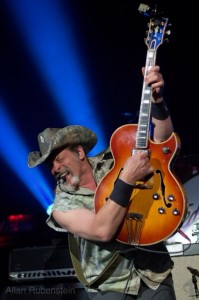 Nugent is known for his over-the-top live performances in his five decades of touring and is on tap to perform his 6,500th live show this summer. He will be pulling from a discography of 37 albums and perform an arsenal of hits throughout the tour. Nugent has sold more than 40 million albums; the release of his latest CD, also titled SHUTUP & JAM! will be available later this year on Frontiers Records.

“Though we can all agree that music is the ultimate communication, killer rock-n-roll is also the ultimate soul cleansing distraction from everyday life,” states Nugent. “I predict the most fun tour of our lives. Politics be damned! SHUTUP & JAM! ”