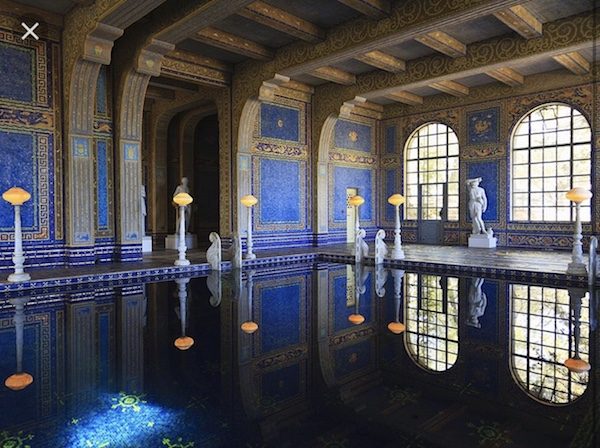 The Roman Pool at Hearst Castle was restored by 1×1-inch smalti, cobalt blue, exact reproduction tiles made by Oceanside Glasstile. The company was created when the founders were awarded the restoration project in 1994. Since then the Oceanside, California company has produced a wide range of glass tile, mostly from recycled glass.

Clark was one of the installers of the Hastings showroom for their grand opening in 1988 and was asked by the owners to install many glass mosaic jobs throughout the 1990s. One of those projects for Clark was installing tile for a brownstone owned by Stephen Sondheim, including all five bathrooms and the vaulted barrel ceiling in the foyer.

Matt Clark was recently brought in to restore the tile in the Julia Morgan built Hearst beach home in San Simeon 2017. Clark is currently creating reproductions of the original Julia Morgan tile patterns for the kitchen of the private Hearst family residence. Julia Morgan. Morgan (1872-1957) designed the San Simeon residence. Over her professional lifetime, Morgan designed more than 700 buildings in California, the YMCA building in Honolulu, Hawaii and was the architect employed by William Randolph Hearst and Hearst family members for building designs. Although Morgan designed many well-known buildings, Hearst Castle is the most famous.

Matt Clark Tile & Stone works with clients to create one of a kind tile and stone projects, from fireplaces and fountains, to patios, kitchens and baths. Matt Clark has worked with tile since 1977, working with industry notables such as Armand Agresti, Ann Sacks, David Garbo and Jed Johnson and a number of outstanding architects, designers, craftsmen, artists and clients on both coasts. Clark and Katie Franklin opened their design studio in San Luis Obispo in 2002.