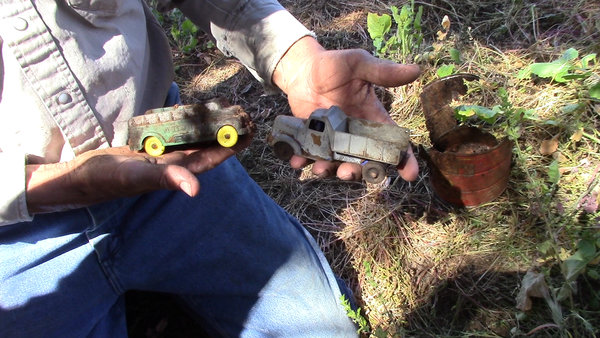 A time capsule found on the west side of Paso Robles.

–A 56-year-old time capsule was recently found at a ranch on the west side of Paso Robles. The capsule buried in a red Folgers Coffee tin included two Tootsietoy trucks originally made in Chicago in the 50s. One of the trucks was one of the first rubber toy trucks made.

Tootsietoys are now highly collected not only by older generations, but by a whole new generation of collectors fascinated by the beauty of these toys.

El Paso de Robles Historical Society volunteer Dale Hiner said his team found the time capsule with metal detectors. The Hiner Group is a group of three members who help discover hidden artifacts in Paso Robles to preserve their history. “When we found the tin we observed a truck which appeared to be blue in color, the Folgers Coffee can was in rusted condition and very fragile. After removing the capsule they took several photographs,” he said.

The time capsule will be displayed a the El Paso de Robles Historical Society located in the Carnegie Library, City Park, in downtown Paso Robles. For more information about The Hiner Group call Dale Hiner (805) 674-1690.