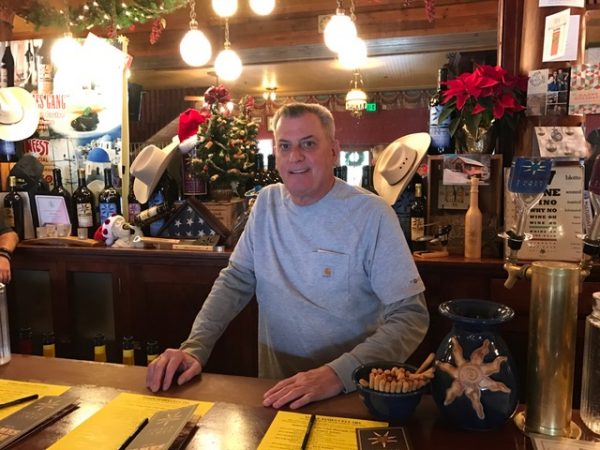 –Tobin James Cellars makes only party-hearty wines — or at least that was my perception.

Certainly, the winery has amassed a fan base drawn to its affordable, approachable “drink now” wines. Not to mention the rockin’ bashes that are staged on the sprawling grounds of the winery. It is said — even the owner isn’t sure — that the winery possesses the largest wine club of any winery in the world.

But there’s the other Tobin James Cellars portfolio, the reserve wines that Tobin (Toby) James has been crafting for a long time. This is what I came to sip and savor.

I met Toby — the name suits his affable, irreverent personality — at his storied Paso Robles Eastside tasting room that resembles nothing more than a Wild West saloon on a Hollywood soundstage. 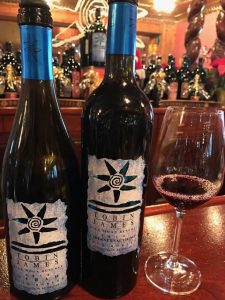 In fact, Toby even compares some of the reserve wines to movie-western legends. The 2013 zesty Fat Boy Zinfandel is like Clint Eastwood, he insists, “a sassy gunslinger,” while the 2012 Blue Moon Reserve Syrah is pure John Wayne — “a tough guy with big personality.”

That Blue Moon designation comes from the old expression “once in a blue moon,” because in the earlier years, Toby had limited access to quality fruit. But with success comes clout and now the vintner can source the best grapes and blue moon comes every vintage.

Reserve wines range in price from $30 to $75, not out of reach for aficionados looking for quality wines, but pricey compared to the non-reserve portfolio that ranges from $12 to $25.

The reserve series are — dare one say it? — “serious” wines with impressive quality and complexity. Only Toby might not appreciate the “S word.” He contends the wine experience is all about “F words” — fun, food, family and friends. 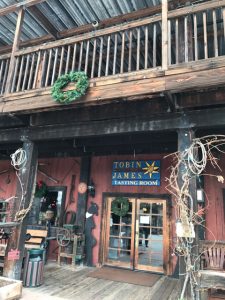 “I don’t get serious wine collectors,” said the vintner, who is part of the legend and lore of Paso Robles wine community.

People get intimidated if they don’t know much about wine, Toby noted. So he has taken the snobbery and geeky-ness out of the wine tasting experience and injected a good dose of entertainment.

So as wines get poured for tastings, expect no lectures about soil, trellising or vineyard sites. “We don’t talk about dirt,” he grinned. “Ninety-five percent [of visitors] want to have fun, and I’m going for these guys.”

On a weekday afternoon, the tasting room was buzzing and the staff seemed to be having as much fun pouring the wine as visitors sipping it.

“Everybody who works here has to have a great personality,” Toby said of his full-time16-member staff. The tasting room is open all year round 10 a.m. to 6 p.m. except for one day; it’s closed on Christmas.

On weekends, the tasting room can get jammed with 800 to 1000 visitors. To accommodate the masses, two additional tasting counters were installed in the cavernous tasting room. “Thirsty people make me nervous,” said Toby on those rare occasions when patrons wait to be served.

Toby aims for people to experience the four F’s because as far as he’s concerned, “there’s only one kind of business — repeat.” To prove his point he drags over a white-haired gentleman who laughingly admits he has been patronizing the winery for some 20 years. Minutes later, another longtime patron stops by to greet Toby.

One huge attraction in the tasting room that was built in 1994 is a historic century-old bar counter that Toby rescued from a saloon in Blue Eye, Missouri, In fact, he built the entire tasting room around the massive counter.

Toby’s story is a saga of kismet. His father grew up in New Jersey in an Italian neighborhood where everyone made wine. The family later acquired a 30-acre vineyard in Indiana where young Toby tended the vines during summer and later worked at his older brother’s wine shop in Cincinnati.

This is where Gary Eberle stopped by one day to sell his wines. Young Toby begged to work harvest for Eberle in Paso Robles. Eberle casually agreed. 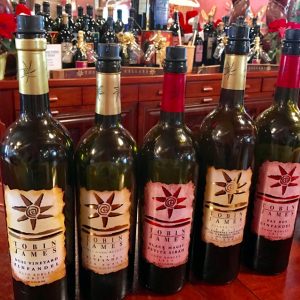 “He didn’t think I’d do it, but I showed up,” said Toby, who worked at Estrella winery and later at Eberle Winery. Both Toby and Gary made quite a team for several years flying around the country with Eberle piloting his plane on sales trips.

In the mid-1980s Toby really lucked out. Twice in fact. First, a vineyard manager at a Paso Robles winery had an excess of six tons of Zinfandel nobody wanted. He offered the grapes to Gary Eberle, who turned it down.

With Gary’s permission, though, Toby took the tonnage of Zinfandel for free and made his first wine at Eberle’s facility. That very first Zinfandel he crafted earned medals up and down the state.

Paso Robles has come a long way from the 1980s era, when there were two stoplights in town, few wineries and fewer restaurants, “Food was brown and you got a lot of it.” Toby recalled. The steady growth of Paso Robles wine region impresses him. “There’s not a bad winemaker or bad wine in the county and our restaurants are making food that goes with the local wine.”

The buoyant vintner is enjoying his success and proud of the business he has built with his partners Lance and Claire Silver. But Toby is nostalgic about the earlier days. “I had more fun when I was broke,” he mused.

As I left, Toby had a question: “Hope we’ve changed your view,” referring to my perception of Tobin James Cellars’ party-hearty wines. The satisfactory smile on my face said it all.