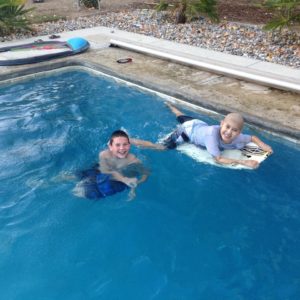 –A local family from Atascadero is hosting a barbecue fundraiser this Saturday, April 28th at 8860 Junipero Ave, for Josh Bedoya, a local boy with cancer. The fundraiser will start at 1:30 p.m. and run until 5:30 p.m.

“My son, Dylan, and Josh Bedoya are best friends,” says Susan Clark, a close friend of the family, “Dylan and Josh have been inseparable since 2nd grade where they went to San Benito Elementary School together”.

Josh was diagnosed with liver cancer while in the 5th grade, at the age of 10. After a series of extensively painful treatments, the family received news that young Josh’s liver was cancer free. However, doctors soon learned that despite having left the liver, Josh’s cancer had metastasized to his lungs. Josh has been actively battling cancer for over 3 years now.

Josh recently had a seizure at home, during which time he had broken his hip from the fall. Doctors have now learned that the cancer has also gone to Josh’s brain, believed to be the cause of the seizure. In the past week, he has undergone a total of 3 surgeries – 1 for his hip and 2 brain surgeries. Doctors have removed approximately 95% of the tumors in his brain to date.

However, as a result of surgery his eyesight has been affected, a side effect the family hopes to only be temporary.

Donations for the family are being accepted at www.alongcomeshope.com/