Tolosa Children’s Dental Center​ chosen as ‘Nonprofit of the Year’ 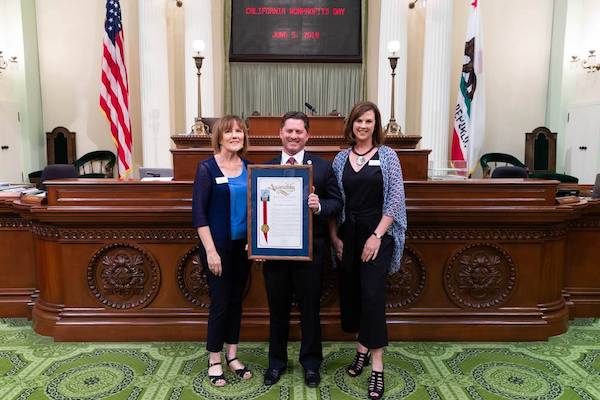 –Tolosa Children’s Dental Center has announced that it has been selected as a 2019 California Nonprofit of the Year by 35t​h​ District Assemblymen, Jordan Cunningham.

Suzanne Russell, Executive Director and Alexandra Chamberlain, Development Director from Tolosa Children’s Dental Center traveled to Sacramento to join with one hundred other nonprofit leaders to be honored by their state senators and assembly members during a celebration luncheon as part of California Nonprofits Day on June 5​.

Tolosa Children’s Dental Center aims to improve access to children’s oral health in San Luis Obispo County by providing compassionate, high quality, and comprehensive dental care to under-served children. It has become a ‘dental home’ serving over 6,000 local children each year. Approximately 1,200 individual children are seen each month and over 16,000 individual children have been seen, in total, since opening in 2003.

“Nonprofits are often hidden in plain sight,” said ​Jan Masaoka, CEO of the California Association of Nonprofits (CalNonprofits). ​“California Nonprofits Day is an opportunity for our elected officials to celebrate the good work they see nonprofits doing in their districts, and for everyone to appreciate the collective impact of nonprofits in our communities.”

California Nonprofits Day, now in its fourth year, was formally recognized by Assembly Concurrent Resolution 62, authored by the chair of the Assembly Select Committee on the Nonprofit Sector, Assemblywoman Monique Limón (Santa Barbara), who will speak at the celebration luncheon. Senator Holly Mitchell will keynote the luncheon. The day is organized by Assembly Member Limón and CalNonprofits.

According to “Causes Count,” a 2016 ​report​ commissioned by CalNonprofits, the nonprofit sector is the 4t​h​ largest industry in the state, employing nearly one million people. Each year, California nonprofits generate over $200 billion in revenue and bring in $40 billion in revenue from outside of California. The unpaid labor contributed by volunteers at nonprofits is equivalent to 450,000 full-time jobs every year.