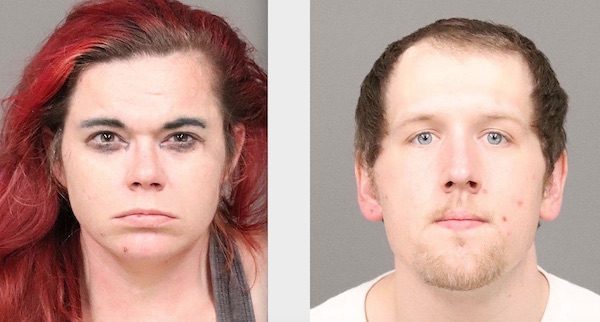 Suspects also had outstanding warrants; one suspect in possession of drugs, stolen property

–On Jan. 23, 2020 at approximately 5 p.m., Morro Bay Police was dispatched to the 2100 block of Main St. to a report of a burglary. The responding officer contacted a witness who advised that the suspects were dressed in yellow safety vests, posing as a maintenance/repair crew, and entered a laundry room in an attempt to pry the change machine open.

The witness confronted the two suspects, Burchnell and Farley, who fled southbound on Main St. in a vehicle. Officers who responded to the scene broadcasted a county-wide description of the suspects and the suspect vehicle.

At 5:08 p.m. San Luis Obispo Sheriff’s Deputies saw the suspect vehicle traveling westbound on South Bay Blvd. from Santa Ysabel St. The deputies discovered Burchnell and Farley had outstanding warrants for their arrest. Both were arrested at the scene of the traffic stop. During a search incident to the arrest by the deputies, Burchnell was discovered to be in possession of methamphetamine.

Morro Bay Police arrived at the scene of the traffic stop and continued the investigation. During the investigation, property was discovered within the suspect vehicle which had been reported stolen in a vehicle burglary in San Luis Obispo.