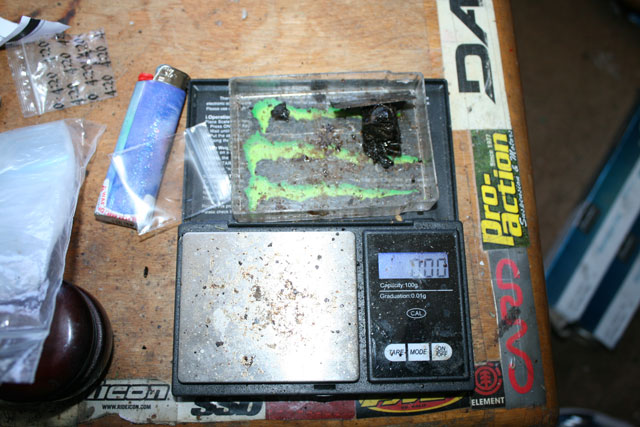 On two separate days last week, two separate investigations resulted in the arrest of two people for possession of heroin for sale.

On July 1, investigators with the San Luis Obispo County Sheriff’s Narcotics Unit served a search warrant at a home located at 8360 Santa Rosa Road in Atascadero. Inside the house, they discovered 4.6 grams of heroin, 0.5 grams of methamphetamine, more than 181 grams of marijuana, and more than $8,800 in cash, according to a report from the sheriff’s office. The heroin had a street value of about $1,000, the report said. Investigators arrested 21-year-old Ross Carl Fitzpatrick of Atascadero for possession of a controlled substance for sale.

Two days later, on July 3, investigators served a search warrant and discovered a honey oil lab at 5525 Capistrano Avenue #25 in Atascadero. They also found 10.7 grams of honey oil, 10.6 grams of the designer drug methylone, 54.6 grams of heroin and more than 238 grams of marijuana. The heroin had a street value of approximately $11,000. 23-year-old Blake William Owen of Atascadero was arrested for the manufacture of a controlled substance and possession of a controlled substance for sale.

The sheriff’s office continues to see an increase in the use of heroin in the county. This issue continues to be a priority for the Sheriff’s Narcotics Unit, the report says.