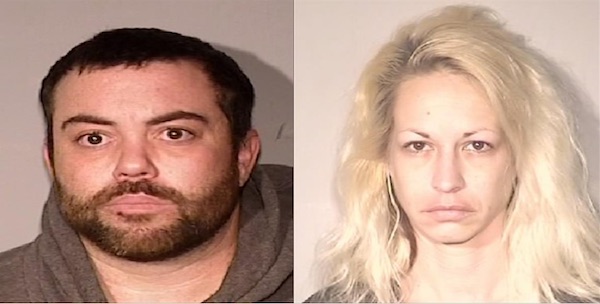 –The Morro Bay Police department has taken into custody Christopher Ryan Nunes and Lindsay Dawnelle Nunes in connection with a string of burglaries in Morro Bay and Atascadero.

On Dec. 8, 2020, a visitor to Morro Bay reported their locked vehicle had been broken into. The victim’s purse, including multiple credit cards, was stolen. It was discovered that multiple purchases were made with the stolen cards throughout the City of Morro Bay and the City of Arroyo Grande. A search of video surveillance cameras within the City of Morro Bay allowed investigators to determine an associated vehicle, described as a maroon Dodge Caravan. As more evidence was collected, investigators learned that both subjects were also wanted on burglary charges in Colusa, CA.

On Jan. 4, 2021, in the city of Morro Bay, a male associated with a maroon Dodge Caravan was reported as shattering the windows of multiple cars using bolt cutters. On Jan. 5, a maroon Dodge Caravan and two subjects were observed coming and going from the vehicle at Motel 6 in Morro Bay. Lindsay Dawnelle Nunes was apprehended while the male subject, later identified as Christopher Nunes, fled from police in the vehicle. Multiple items of stolen property were located in the motel room. Lindsay Nunes was arrested and booked on multiple felony charges. A warrant was issued for Christopher Nunes and broadcasted to SLO County agencies with the associated vehicle.

On Jan. 6, Christopher Ryan Nunes was seen by Atascadero PD driving in the maroon Dodge Caravan. A traffic stop was initiated resulting in a short foot chase into a business where Christopher Nunes was taken into custody. Morro Bay PD detective responded to the scene and discovered both Christopher and Lindsay (after being released from jail) were engaged in a commercial burglary spree in the city of Atascadero. The associated vehicle was searched, and multiple items of stolen property were recovered.

A portion of the property has been identified by several SLO County businesses and has been returned.

The investigation is ongoing. Anyone who has any information regarding this incident is asked to please contact the Morro Bay Police Department (805) 772-6225 or San Luis Obispo County Crime Stoppers at (805) 549-STOP.