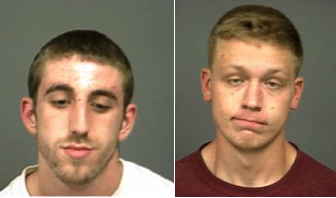 The SET detectives observed two suspicious individuals in the parking lot of the Target Shopping Center on Theater Drive, Paso Robles. The two suspects appeared to have been involved in a “hand-to-hand” drug transaction in the parking lot.

The detectives contacted the two suspects and a subsequent search revealed .2 grams of suspected heroin and a hypodermic syringe. The two suspects were arrested for felony possession of a controlled substance and possession of narcotic paraphernalia. Both were booked into the San Luis Obispo County Jail.