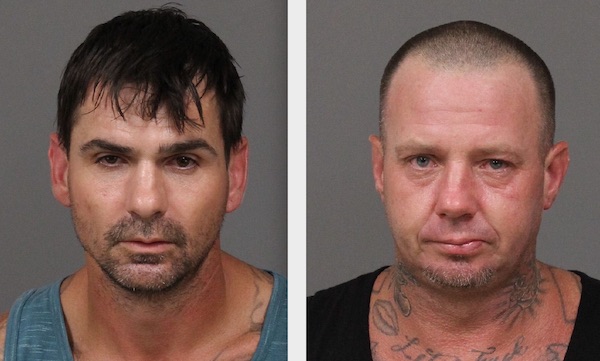 –On Tuesday at 10:19 p.m., Atascadero Police officers responded to the area of Curbaril Ave. and Castano Ave. after a witness reported seeing a suspicious vehicle driving through the area. A witness watched the occupants steal items from mailboxes before driving away.

Responding officers searched the area and located the described suspect vehicle in the 6900 block of Sycamore Rd. A traffic stop was conducted and suspects, William Satterfield (43) of Oakland, CA and Ronnie Bankston (45) from Vallejo, CA were found in possession of pieces of mail and other personal identifying information from over 75 victims throughout San Luis Obispo County and surrounding areas in California. Satterfield and Bankston were also found in possession of burglary tools, drugs, and drug paraphernalia.

Both suspects were arrested and booked at SLO County Jail. The mail recovered has been returned to the post office and we are currently conducting follow up investigation with potential victims.