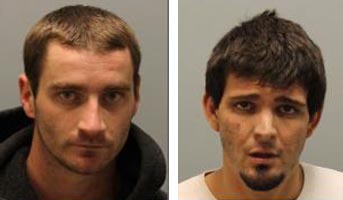 –On Sunday at approximately 8.40 p.m., Paso Robles Police Department officers arrested Jeremy Matthew Sundahl, 27, of Paso Robles, and Jordan Nogo, 25, of Paso Robles. Sundahl and Nogo are suspected of burglarizing a residence along the 200 block of Palomino Circle.

The residents of the home reported to police they walked into their home at approximately 7 p.m. to find at least two people inside their house. Upon being confronted the suspects fled the home, however the residents were able to observe a license plate of the getaway vehicle. The victims reported that several thousand dollars’ worth of jewelry were stolen from the home.

Responding officers obtained Department of Motor Vehicle registration information based upon the resident’s observation of the license plate. The car, a white 2001 Chevrolet Malibu, revealed the registered owner was associated with a residence on Pino way, Paso Robles. Officers began surveillance of the home and eventually observed the suspect’s car pull into the driveway. Officers made a traffic stop on the car, however two passengers (one male and one female) ran from the car upon stopping. The driver, Sundahl, was arrested without incident. A search of the area was successful and officers arrested Nogo hiding in nearby bushes. A third female suspect was not located.

A search of the car resulted in all of the victim’s property being recovered and returned to the owners.

Officers were able to positively identify the female suspect as Michele Marie Chavez, 20, of Paso Robles. Officers determined Chavez is currently wanted by SLO County Probation for a no bail probation violation warrant.

The victims of the burglary positively identified Nogo as the person they had encountered in their home and later determined the other suspect was Sundahl – their grandson. Sundahl and Nogo were booked into county jail on the following charges:

The Paso Robles Police Department is requesting the public’s assistance and encourages anyone with information about these or other crimes, to call the Paso Robles Police Department at (805) 237-6464. Or persons wishing to remain anonymous are encouraged to call Crime Stoppers’ 24-hour hotline at 549-STOP or by texting “SLOTIPS” plus your message” to CRIMES (274637).