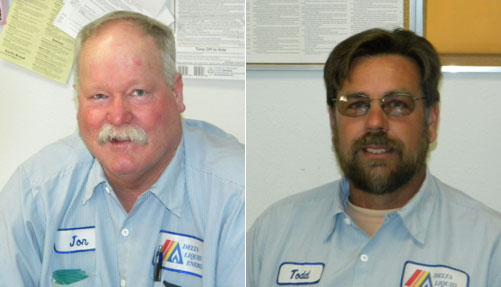 If you’ve had propane delivered to your Paso Robles-area home or office at some point in the last 20 years, chances are you’ve met Jon Cook or Todd Nickerson. Longtime Propane Delivery Specialists for Delta Liquid Energy (DLE), a third-generation, family-owned and operated propane marketing company based in Paso Robles, CA, Cook and Nickerson are celebrating their respective 19th and 17th anniversaries with the company. On the cusp of two decades in the propane industry, they recently looked back on the biggest changes they’ve witnessed and the reasons they’ve been happy to call DLE their employer for so many years.

Prior to getting behind the helm of a DLE vehicle in March of 1997, Todd Nickerson manned a bobtail truck for Northern Energy. One by one, however, Nickerson saw many of his co-workers moving over to DLE. “People say the grass is always greener,” Nickerson laughs. “This time it actually was!” He became a Delivery Specialist for DLE, assuming responsibilities such as propane deliveries to customers and taking care of yard maintenance, weed abatement and tree trimming both at the Paso Robles headquarters and at the Cambria substation.

Nickerson recalls that the industry has seen many technological advances during his tenure. “It’s completely different now,” Nickerson says, noting that he used to fill out reports by hand, schedule customers individually for every refill, and hand-draw maps to each location. “Today, the routes are mapped by GPS. There are no more hand-written tickets and everything is done using a tablet in the truck.”

While technological advances have made his job easier, Nickerson says he has always truly enjoyed working with Delta Liquid Energy. “I especially appreciate the tight-knit team of employees that is always there to help one another,” he says.

More than 19 years ago, before October of 1995, Jon Cook was spending his work week in the San Ardo oil fields, commuting a total of 70 miles per day to get to and from his post. He decided it was time for a change and soon found out about an opportunity at DLE through a friend of his wife’s. Cook made the switch, exchanging a long commute for a local position managing four different routes.

“Every day, I get up and go out there and start pumping gas,” Cook says of his routine work. However, he too notes how dramatically his work has changed over the years. “Today everything is electronic and invoices are printed instead of hand-written, making the work much quicker.”
Now approaching his 20th anniversary with DLE, Cook says, “Delta Liquid Energy is a great company to work for. Everybody takes care of everybody, and I really appreciate that.”