Paso Robles News|Monday, October 26, 2020
You are here: Home » Entertainment » Two show dates added for It Had To Be You

Two show dates added for It Had To Be You 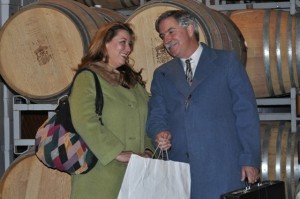 Kristen Saunders plays Theda Blau and David Norum plays Vito Pignoli in Wine Country Theatre company’s debut production, It Had to Be You at the Via Vega Double Playhouse. Photo by Meagan Friberg.

The response to the live theatre production of It Had To Be You at the Via Vega Double Playhouse has been so overwhelming that two additional performances have been added to the calendar.

The original eight performances, scheduled to run Feb. 21 – Mar. 15, have all sold out. On Monday afternoon, Via Vega owners April and Larry Gomez, along with Wine Country Theatre founder, director and producer Cynthia Anthony, announced the addition of two shows to the lineup: March 21 and 22.

Seating is limited and guests are encouraged to purchase tickets now for the Friday, Mar. 21 or Saturday, Mar. 22 performance at www.viavega.com.

Described by Anthony as a “hilarious and delightful romantic comedy,” It Had To Be You features Kristen Saunders in the role of Theda Blau, a failed B-movie actress, health food nut, and would-be playwright looking for love and success in New York. She meets Vito Pignoli, a TV commercial producer and director played by David Norum, at an audition for a commercial.

Following a romantic encounter, Theda holds Vito hostage in her apartment where, despite their differences, and the fact that Vito thinks Theda is crazy, the two are drawn together. With a bit of ‘persuasion’ Theda manages to convince Vito to be her partner both on and off the stage; eventually, love prevails.

“Performing live, in front of an audience, in the intimate setting of the tasting room, is unique to this area,” says Anthony. “Everything will play out within inches of the audience, there is no curtain or formal entrance; we bring the actors and the audience together.”

Doors open at 7 p.m.; show starts promptly at 7:30 p.m. Ages 21 and over please; $25 per person, $5 discount for Bullpen wine club members; wine, soda, coffee, tea, cheese platters and dessert available before and after show and during intermission; no outside food or drink allowed. To purchase tickets and for more information, visit www.viavega.com or call the Via Vega tasting room at (805) 423-2190.