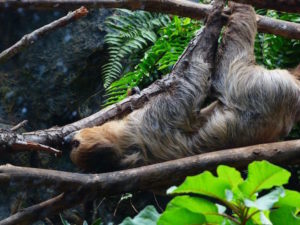 Stock photo of a two-toed sloth.

–On Sunday, July 9, the two-toed sloth named “Rayne” who was recently put on public exhibit at the Charles Paddock Zoo, was found deceased by the local zookeepers during their regular, early morning rounds. It is believed the sloth likely passed away sometime Saturday night. Initial indications are that the sloth may possibly have suffered a heart attack, but a necropsy will be performed to determine the actual cause of death.

There are many animal residents at the Zoo that are not on public display. Rayne had been a member of the Zoo’s animal family for over a year and a half and was well-acclimated to the zoo and his keepers. The sloth had not been on display to the public until recently. Due to recent construction activity at the zoo, an exhibit became available for Rayne and when that happened, he received quite a bit of local publicity.

The hot, tropical Central and South American rainforests are the natural habitats of the sloth. The four-year-old male sloth at the zoo had not shown any signs of illness or distress. Zoo Director Alan Baker says that the keepers are heartbroken over the loss and that it is always hard on the keepers when an animal under their care passes away. The necropsy to determine the sloth’s cause of death will be performed by Zoo Veterinarian, Dr. Steve Robinson.