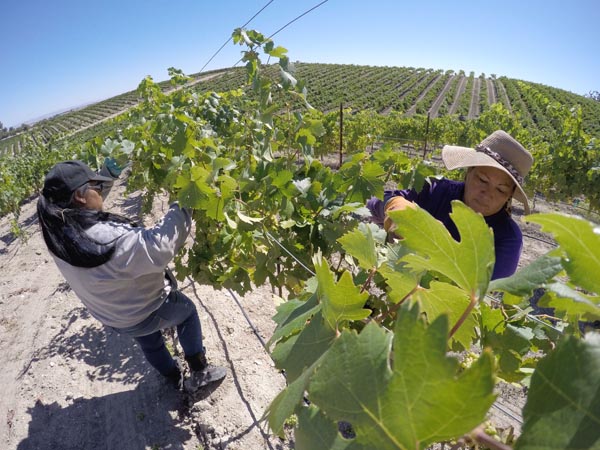 Leticia Espinoza, right, and Maria Ortega prune grapevines at a vineyard in Templeton, Calif. Groundwater levels have declined in the area as the number of vineyards has grown. Photo: Steve Elfers, USA Today.

–USA Today published an article Thursday about the overdraft of water basin in the North San Luis Obispo County, as well as surrounding areas such as the Central Valley. Here is an excerpt:

“Two decades ago, the rolling hills of Paso Robles were mostly covered with golden grass and oak trees. Now the hills and valleys are blanketed with more than 32,000 acres of grapevines,” the article reads. “Surging demand for wine has brought an explosion of vineyards, and along with it heavy pumping of groundwater. With the water table dropping, many people have had to cope as their taps have sputtered and their wells have gone dry.

“Drilling a new well can cost $30,000 or more, and for Juan Gavilanes and his family, that’s out of reach. Instead, they’re relying on a neighbor who lets them use his well, and they bring water to their house through a hose. Standing in his parched yard, Gavilanes said life has changed radically. He let his vegetable garden die. His family uses a coin laundry. They take quick showers and eat on paper plates. He said it’s quite clear where their water has gone and why their well is empty.”

The article then goes on to interview local families whose wells have run dry, and talks about the statewide issue of dropping water levels.