Veterans participate in Fight Club for Men at SkyRose Ranch 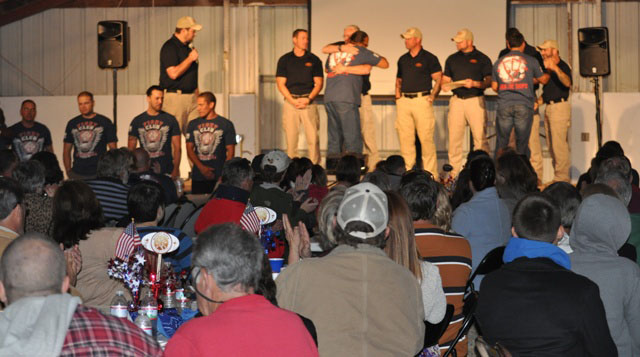 Veterans are celebrated after completion of the six day Fight Club for Men program during a public graduation ceremony in April. The community is invited to help celebrate the June graduates on Friday, June 12 at SkyRose Ranch. Photo by Meagan Friberg

– The leaders and instructors of Mighty Oaks Warrior Programs, a branch of Serving California, are once again hosting a group of veterans at the SkyRose Ranch in San Miguel this week. To celebrate the veterans’ completion of the six-day Fight Club for Men program, a public graduation ceremony and potluck dinner will be held on Friday, June 12 at 7 p.m. at the ranch. 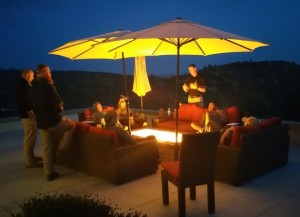 At the most recent camp in April, 35 warriors participated including many that had completed the program themselves as students at an earlier date and returned to go through the leadership and instructor training. That was the case for Tim Drinan, 24, who retired from the United States Marine Corps on April 29 after 13 years of service. He discovered Mighty Oaks when leaders visited the Wounded Warriors battalion at Camp Pendleton.

“This is the only thing that worked for me,” said Drinan. “It changed my life and brought me back to where I needed to be and where my family needed me to be. No one can heal a combat veteran like another combat veteran.”

At this week’s Fight Club camp, Drinan returned as an instructor after first going through leadership training. He said the program equips veterans with the tools to go back home and face life with a new purpose.

“It doesn’t just stop here,” he said. “The guys with Mighty Oaks genuinely care – they call, they text, they know you, and they make sure they stay in touch. These are true, authentic men that will hold you accountable for what you do and what you don’t do. They are there whenever you call; they help you when you’re struggling.” 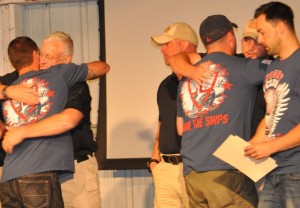 Fight Club for Men graduates are congratulated by their leaders and instructors during the April 2015 celebration. Photo by Meagan Friberg

Chad Robichaux, a retired Marine, founded Fight Club for Men and the Mighty Oaks Warrior Programs after undergoing his own lengthy battle with post traumatic stress that nearly destroyed his family life. As the Vice President of Serving California over Veteran Affairs, Robichaux, along with his wife, Kathy, dedicates countless hours to ensuring veterans and their families have a fighting chance against the effects of PTS through Fight Club for Men, Fight Club for Women, and Marriage Advance.