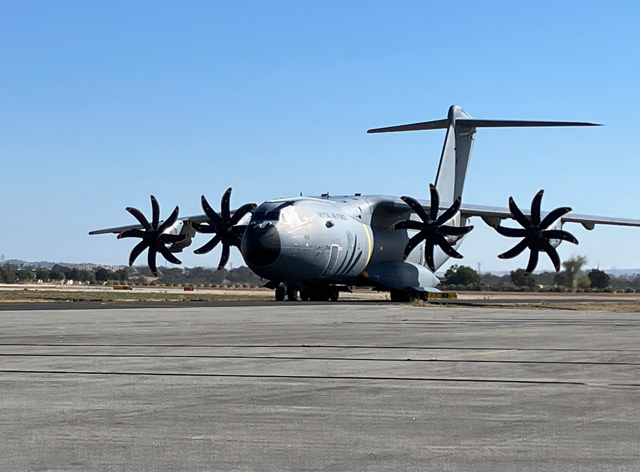 – A British transport plane arrived at Paso Robles Airport on Saturday in preparation for a series of missions to train high-altitude paratroopers.

The Airbus A400M Atlas is a European four-engine turboprop military transport aircraft, according to Wikipedia. It was designed by Airbus Defence and Space as a tactical airlifter. Its size is between the C-130 and the C-17 Globemaster III. It can carry heavier loads than the C-130 and is able to use rough landing strips.

The Royal Air Force (RAF) will use nearby Ft. Hunter-Liggett as a training area according to the crew accompanying the giant aircraft. Paso Robles Mayor Steve Martin said he was told the RAF missions would entail up to 80 personnel for up to five weeks at a time.

“We’re excited about the prospect of being a part of this international operation,” said Paso Robles Mayor Steve Martin who greeted the arriving airplane. “Not only does it make great use of our airport, which was designed for military use, but it will raise the awareness of our potential for expanded air services in the future.”

Paso Robles Mayor Steve Martin in the cockpit of a visiting Airbus A400 at Paso Robles Airport.

Paso Robles City Manager Ty Lewis said the city is exploring a relationship with the Royal Air Force and their desire to utilize the airport for training. “This relationship would enhance our local economy through fuel sales, lodging, and sales tax revenue. This will likely be a one-year contract with the RAF as we evaluate the impacts to airport operations and infrastructure. Overall, the city is excited to better utilize such a significant community asset.”

City Councilman Fred Strong who was at the airport on Saturday said the plane is impressive in that it distributes its weight to be well below the airport’s safety limits. “It’s about as wide as a 727 which our airport was built for,” he said. “The crew is friendly and well trained. It has capabilities for combat training that our planes don’t have. It will be excellent training for our troops to interface with others in NATO.” 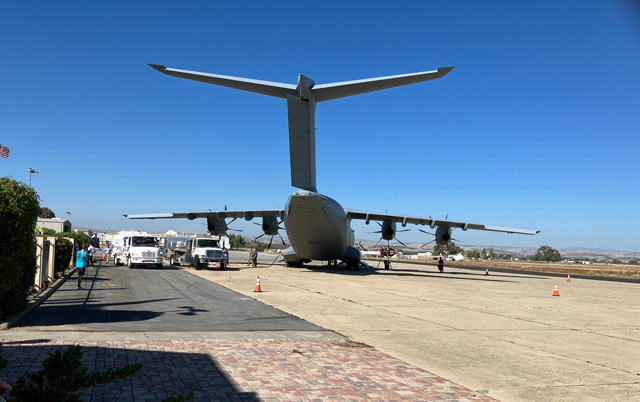 Martin said the Paso Robles Airport is often mentioned as being a potential site for air freight and other services. It already serves as a busy general aviation facility that daily accommodates small recreational aircraft, the California Highway Patrol, CalFire air attack bombers, and a wide array of private and corporation jet planes. The City of Paso Robles is currently pursuing a spaceport license from the Federal Aviation Administration to accommodate new horizontal-lift aircraft that would operate out of the Paso Robles Airport, taking off and landing like jet aircraft, and lifting small payloads to low earth orbit and at a fraction of current costs.

“For 40 years we’ve said our airport was a diamond in the rough,” said Martin. “The RAF missions are one more way we are putting a shine on that diamond.”