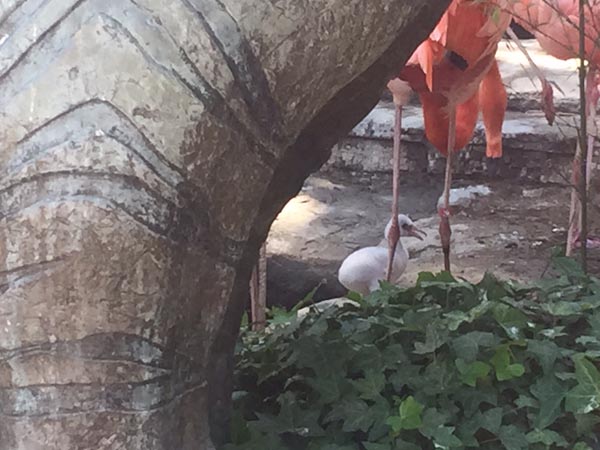 Photo and video courtesy of the Charles Paddock Zoo and the City of Atascadero.

Charles Paddock Zoo Director Alan Baker reported Tuesday that a new Caribbean Flamingo chick successfully hatched at the Zoo on Memorial Day. The baby bird can now be seen as it peeks from beneath its mother’s wing or standing on the nest mound near the pond in the zoo’s flamingo exhibit, he announced in a press release.

According to Baker, “A small group of Caribbean Flamingos has been exhibited for many years in several different areas of the zoo. Flamingos don’t typically breed unless they reach a critical number of individuals. In 2013, our flamingo group was moved to their new and larger exhibit; in addition, the flock was increased by a dozen birds which we acquired from the Hollywood Park Raceway when it closed. These changes have resulted in the first flamingo chick hatching at the zoo”.

In their natural habitat, flamingos build nest mounds in the shallow water to keep their eggs and offspring out of the water until they are ready to fledge. Over the last several weeks, the zoo’s small flamingo flock began building nest mounds and then began laying eggs.

“Scientists think flamingos need a large number of birds to initiate breeding, and that smaller flocks tend not to breed as well as larger ones. So the mating activity and a successful hatch in our small flock of flamingos was somewhat unexpected, but very welcome,” Baker said.

Once flamingos breed, both parents work together to build a nest. A flamingo nest is basically just a mound of mud about a foot high where the female lays a single, large egg. Both parents then take turns sitting on the nest until the chick hatches. This is the first and only flamingo egg to successfully hatch so far at the zoo.

A Caribbean Flamingo chick is gray-white, and for the first month or so its bill is straight, not curved like an adult bill. The chick stays in the nest for up to two weeks. During this time, both parents take turns feeding it a type of “milk,” which comes from the parents’ digestive tract. After about two weeks, the chicks start venturing from the nest. In the wild, all of the young hatchlings in a flock join together to form a large nursery, or “crèche,” which is supervised by all the parents.

The young chick at the zoo will develop the trademark pink coloration normally associated with flamingos which comes from the pigments in the algae, crustaceans, and other invertebrates in their diet. In the wild, these birds inhabit shallow bodies of salty water where this type of food is plentiful.