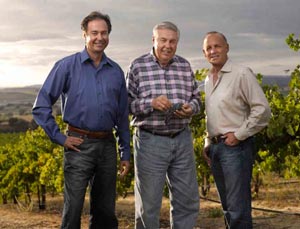 In a letter to local water officials, Jerry Lohr of J. Lohr Vineyard and Wines proposes to temporarily use Nacimiento Water Project reserve water as a “proof-of-concept”. The concept is to use untreated Nacimiento water in lieu of well water to offset basin pumping and meet irrigation needs.

Temporarily using available Nacimiento water in this manner is positive active water management, allowing both irrigators and regional water managers to directly observe the effects of in lieu deliveries, he said. It will both reduce basin pumping and allow examination of impacts on water levels. Not only was this practice envisioned in the Nacimiento Water Project delivery entitlement contracts, it addresses concerns regarding basin pumping and the needs of irrigated acreage that overlie the Paso Robles Groundwater Basin, App said.

In the letter to county public works director, Paavo Orgen, Lohr says, “The severe drought conditions have motivated us at J Lohr Vineyards to proactively develop this Proof of Concept Project. We understand that Surplus Water is available from the district for sale to reserve
water customers, and we see an immediate need during this time of drought to implement temporary programs to provide recharge to the groundwater basin utilizing these surplus supplies.

“Nacimiento Water, temporarily delivered to the Estrella Subarea, will be recharged into the groundwater using the in-lieu pumping method, Nacimiento Water used to irrigate agricultural crops in-lieu of pumping groundwater to do the same. The overliers in this vicinity, and the City of Paso Robles, a participant in the Nacimiento Water Project, will all benefit from this proof of concept project.”