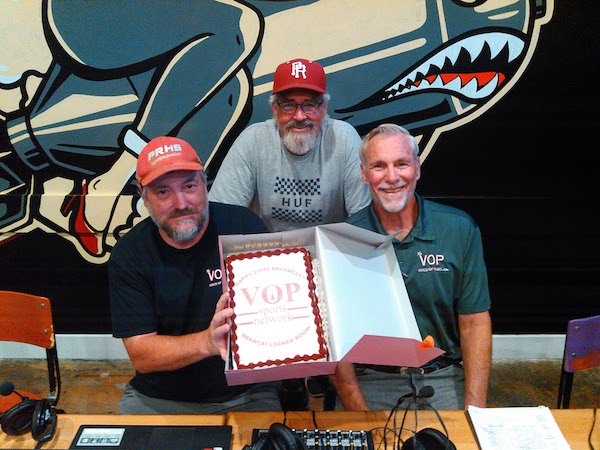 –The Voice of Paso (VOP) broadcast crew recently celebrated the 200th broadcast of the “Bearcat Locker Room” radio/video show. The show is broadcast each Tuesday at 6:30 p.m. from various locations and features interviews with local athletes and coaches. The 100th show was broadcast from Sweet Lew’s Pizza at 11th and Pine Street in downtown Paso Robles.

“This has been an amazing ride,” said show host Jim Wiemann. “This show has been going for years now and we’ve enjoyed amazing listenership and viewership. Who doesn’t love local sports?”

Former Paso Robles High School Coaches Bill Stansbury and Dave Lambert and Adult Softball Supervisor John Doss round out the crew. Other guest commentators include Tim Stewart, local high school athletes and coaches from a variety of high school sports. The show is broadcast on the VOP Sports Network. Video is also presented on the VOP Livestream channel. All are available via smartphone apps (mytuner.com, live365.com and others), as well as www.VoiceOfPaso.com​.

“The Bearcat Locker Room is local sports at its best,” said VOP founder Steve Martin. “The broadcast crew consists of the same people who regularly broadcast local high school sports live on the VOP. They know the coaches, they know the athletes and they know the sports. They get listeners and viewers from more than three dozen states and several foreign countries. It’s the perfect way for friends and relatives who reside out of the area to keep up with local youth and their sports activities.”
It’s “Year Three on the VOP.” The Internet-based broadcast service has been broadcasting local events since 2016 including high school sports, parades and the Paso Pops 4th of July event. The VOP consists of four radio stations (sports, country, oldies, jazz) and a video Livestream channel. The stations operate 24 hours per day and are accessible via smartphone apps or by visiting ​www.VoiceOfPaso.com​.

For more information about the VOP and how to get involved call (805) 296-2487 or email feedback@voiceofpaso.com​.